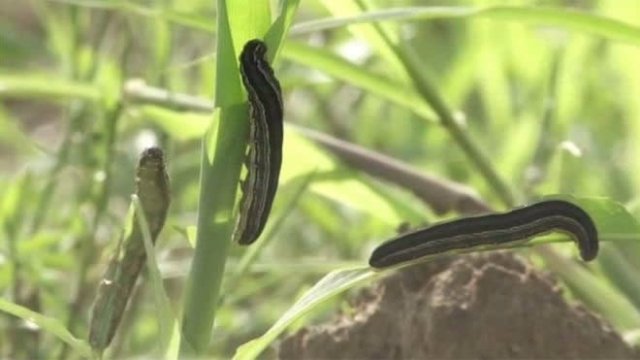 Scientists at the Council for Scientific and Industrial Research (CSIR) have warned there could be a major resurgence of the Fall Armyworm pests on farms across the country from next month.

Scientists at the country’s premier science and technology institution, therefore, want the government to immediately activate a fight back plan to avert destruction.

Fall Armyworms are pests that wreak havoc on crops if left to multiply.

The caterpillars mainly attack maize crops and eat everything in an area. Once the food supply is exhausted, the entire "army" will move to the next available food source.

Since March this year, the pests have invaded more than 115,000 hectares of farm fields leaving farmers struggling to recoup their investments.

The invasion appears to have died down as the major planting season ended last month.

However, Entomologists at the Crop Research Institute of CSIR say the upcoming invasion could be worse than what farmers had to battle with a few months ago.

Dr. Kofi Frimpong Anin, an Entomologist at CSIR, said the pests are likely to strike stronger from next when a new farming season starts.

“Normally, after a major season, we have high residue of the pests in the system. So once you move into the minor season they strike and the infestation is worse compared to the major season.

“It is likely that we are going to have a worse season compared to the minor season if you don’t manage it well,” he told Joy News.

When Agric Minister, Dr. Akoto Owusu Afriyie appeared before Parliament last month to answer questions about the Armyworm invasion, he revealed that some 112,812 hectares of farmlands were affected by the fall army worm but only 14,430 hectares were destroyed.

He also indicated that the pests have been defeated, adding there is an ongoing research into biological control which will be implemented as a long term plan to rid the nation of the pest.

The Minister added that his team will create a strategic stock of chemicals in the regions and districts so control will be issued at any point in time there is another attack.

Again, farmer training he explained, is being intensified when it comes to the detection of the pest to avoid the recurring of the situation.

However, farmer unions have denounced the Minister's declaration that the pests have been destroyed, accusing him of belittling the debilitating effects of the pests.