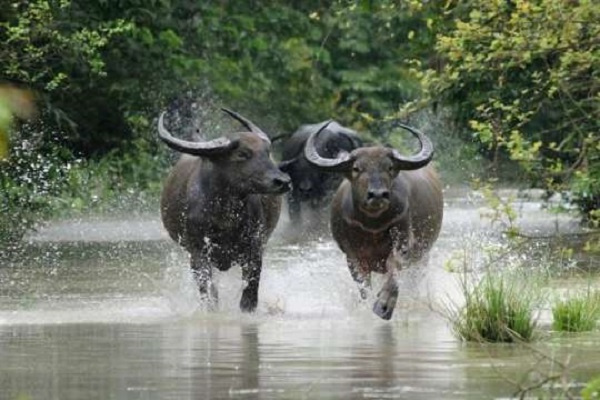 Three animal species that are under various threats, according to the International Union for Conservation of Nature (IUCN, have been discovered in Ghana.

These species, made up of three amphibians and a buffalo are on the Red List Categories of IUCN, a global authority on the status of the natural world and the measures needed to safeguard it.

A rare species known as Wild Water Buffalo - Bubalus arnee has also been re-discovered in the Upper West Region of Ghana.

Mr. Raymond Owusu-Achiaw, the Programmes Manager of Conservation Alliance International and a Member of the African Biodiversity Challenge - Ghana Team, told the Ghana News Agency in Accra that, the discovered species were part of 23,932 biodiversity data gathered on nature, which includes pollinators, forestry, food crops and class of animals.

He explained that the species when conserved and protected would improve the health of the ecosystem to ensure its stability and also build its resilience to mitigate against climate change effect and natural hazards.

For the frog species, he clarified that they fed on insects and that helped them to regulate and maintain the population of insects to keep the balance of the ecosystem.

Mr Owusu-Achiaw stated that frogs served as a source of food for other species such as snakes and also its venom was used to produce anti snake medicines.

“Imagine there were no frogs, this country would have been inundated with insects. The ecosystem is like a chain and every actor has a role to play to make the system work efficiently,” he said.

“The flow of the chain becomes distorted when an actor perishes or is not accounted for and this disturbs the whole system and it will at the end of it all affect human beings.”

Mr Owusu-Achiaw called for a periodic assessment of biodiversity, just as the National Census to the nation and also build a robust database of Ghana’s biological resources to know the low sides and take remedial measures to improve them.

He urged the government and regulatory agencies to work together to enforce the law governing biodiversity in the country due to its rapid deterioration due to human and development activities.

According to a recent Intergovernmental Science-Policy Platform on Biodiversity and Ecosystem Services (IPBES), nature was declining globally at rates unprecedented in human history and the rate of species extinctions is accelerating, with grave impacts on people around the world.

"The health of ecosystems on which we and all other species depend is deteriorating more rapidly than ever. We are eroding the very foundations of our economies, livelihoods, food security, health and quality of life worldwide."

"The Report also tells us that it is not too late to make a difference, but only if we start now at every level from local to global," he said.

"Through 'transformative change', nature can still be conserved, restored and used sustainably - this is also key to meeting most other global goals. By transformative change, we mean a fundamental, system-wide reorganisation across technological, economic and social factors, including paradigms, goals and values".