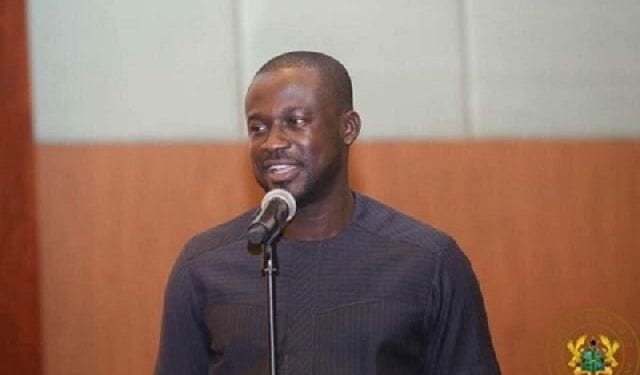 The Director of Communications at the Presidency, Eugene Arhin has in a Facebook post reacted to the viral divorce petition filed by his wife.

According to him, the petition for divorce filed by his wife was deliberately leaked on social media although he has not yet been served with the court processes.

In a statement shared on Facebook, Mr Arhin said his lawyers will respond to the divorce petition when he is served but maintained that he will not engage in any public banter on the matter because of his children and the dignity of his wife, Mrs Gloria Assan Arhin.

Reacting to some of the claims made in the viral petition against him for among others, physical abuse and adultery, Mr Arhin said he will "deal with them in the Court of Law".

He posted: "I have seen a divorce petition filed by my wife, which has been deliberately leaked all over social media obviously to achieve a certain effect. I have still not been served with these court processes, and, upon receipt, my lawyers will respond accordingly. Every marriage has challenges, and such challenges should not be addressed in the court of public opinion. I will not, for the sake of my children, and for the dignity of my wife, engage in any public banter. In as much as many of the claims levelled against me are baseless and untrue, especially with respect to properties and physical abuse, I will hold my peace and deal with them in the Court of Law".

In Mrs Arhin's divorce petition she states that the nine-year marriage hit the rocks shortly after Mr Arhin’s appointment as Director of Communications at the Office of the President in January 2017.

She also disclosed that Mr Arhin in "clear indication disinterest of the marriage" has moved out of their matrimonial, leaving her alone with their three children.

Mrs Arhin also alleges that the respondent has "committed and keeps committing adultery". She also added that the marriage has "broken down beyond reconciliation and all attempts aimed at resolving the challenges have proven futile".

She is seeking among others, a dissolution of the marriage, custody of their three children and a court order for Mr Arhin to pay her
GH¢2million.

She also makes a series of accusations against Mr Arhin, including physical and verbal abuse which she claims has persisted for over a year.