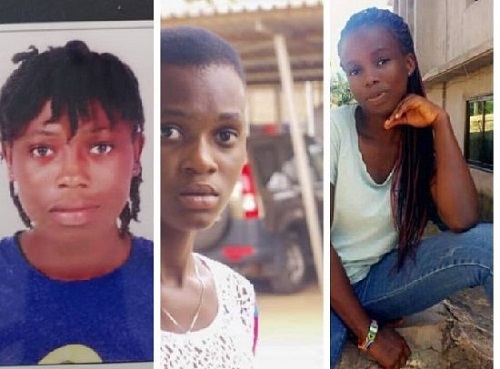 Families of four kidnapped Takoradi girls who were later confirmed dead by the Ghana Police Service are currently in a meeting with the top hierarchy of the police in Accra.

About 20 family members of the victims arrived at the Police Headquarters this morning, they have since the announcement of the forensic test rejected the result.

Addressing the media before the meeting, spokesperson for the families Michael Grant Hayford said the families will insist on an independent DNA test of the remains.

READ ALSO: Police are obliged to release the remains of Tadi girls to their families - Francis Sosu

Families of the three kidnapped girls are demanding for an independent body to conduct the DNA test on the human remains recovered by the police behind the Kansaworodo residence of the prime suspect, Samuel Udoetuk Wills who is standing trial.

The police, on Friday, August 2, as part of investigations into the kidnapping of the three Takoradi girls who have gone missing for almost year, conducted an operation led by the Takoradi police command leading to the discovering of body parts in a septic tank.

The remains were transported to the Police Hospital in Accra where the police after forensic examination declared the girls dead.

The families in a joint press conference insisted they require an independent DNA test.