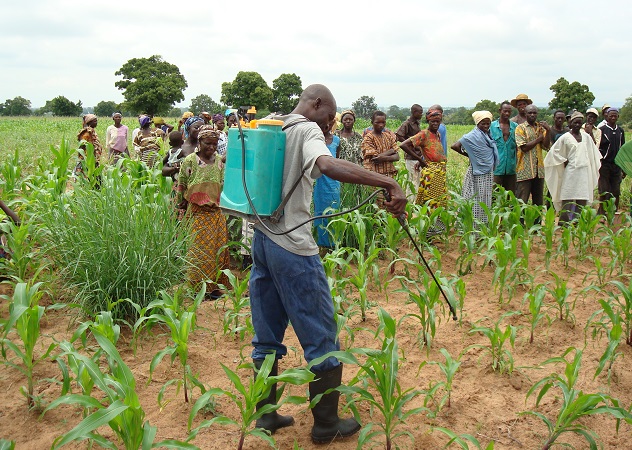 The Deputy Director of the Plant and Regulatory Directorate, Mr Attepoe Prudence has cautioned farmers to avoid overusing chemicals in the name of making money to prolong the lives of Ghanaians.

According to him, some farmers overuse the chemicals to make the crops grow faster and also to preserve the crops for longer periods to make enough sales during the shortage of such crops.

Mr Attepoe Prudence in an interview with Daily Graphic cautioned farmers not to misuse chemicals on their crops in the name of preserving it. Adding to that he said many farmers do not seek counsel from experts on how to manage chemicals in preserving their crops

“ I am begging all farmers to seek counsel on these chemicals before using them and also avoid overusing the chemicals in the name of making money…the lives of citizens are more expensive than money”, he cautioned.

He noted that some farmers intentionally overuse the chemicals though they know the consequences.

“I once saw a farmer going to sell okro in the market right after spraying it with chemicals” …. I asked him if he would use the okro himself, he said no''.

According to him, the farmer stated that he urgently needed money that is why he did what he did, even though he knew the health implications on the general public.

Also, the Assistant Director of the Plant Protection and Regulatory Services Directorate of the Ministry of Food and Agriculture (MOFA), Mr Richard Agbenu pleaded with all farmers to seek counsel from the Plant Regulatory officers or any expert in the field of farming to help save lives.

He noted that petty diseases in the country can be attributed to the things we consume.

According to him, some of the fungi on tomatoes (whitish growth found on tomatoes) can be very poisonous to the human system when consumed.

Again, Mr Agbenu together with an officer of the Plant and Regulatory Services of MOFA, Mr Raymond Etu lamented the total disregard the public pays rotten tomatoes, even when the signs should be clear that all is not well with it.

The two said it was dangerous to take in the whitish fungi, and cautioned the public further to avoid any vegetable that does not appeal to the eye.

“Due to ignorance, many use these tomatoes for their day-to-day meals. Others also use it due to lack of money, since those ones are softer than the usual ones and sold cheaper….. They go for it without thinking of the health implications”.