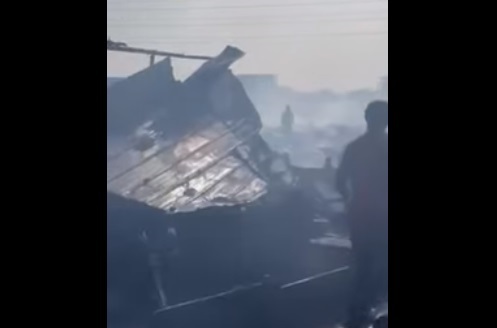 Several residents have been rendered homeless following a fire outbreak that swept through Waterland, a suburb of Tema Newtown in the Greater Accra Region.

About 50 wooden structures used for commercial and residential purposes and a church got razed down by the fire outbreak.

It is unclear what might have caused the inferno. The Ghana National Fire Service in a post indicated that 'there were no casualties recorded.'

According to the service, "the plucky Firefighters were able to salvage the Apasco guest house, 25 houses, The Lamb of God Ministry Church auditorium and two public bath houses from the destructive fire."

Residents of Water land near Apasco Guest House in Tema Newtown this afternoon had a terrible experience when a fire whose cause is not yet known razed down over 50 wooden structures used as both commercial and residential purposes and as well as the Christ Defense Church Mission's auditorium without recording any casualty.

Firefighters risked it to the fully developed fire scene within 2 minutes after receiving the distress fire call at 1333 hours. Five (5) fire appliances in total, were marshalled to contain the ferocious fire.

The rampaging fire was brought under control at 1439 hours and finally extinguished at 1610 hours.

The plucky Firefighters were able to salvage the Apasco guest house, 25 houses, The Lamb of God Ministry Church auditorium and two public bath houses from the destructive fire.

Kudos ✌️🔥💪 to the dexterous and gallant Firefighters from Tema Newton, Tema Metro, Tema Industrial and GPHA Fire Department who succeeded in tactically extinguishing the fierce flames in quadrants.