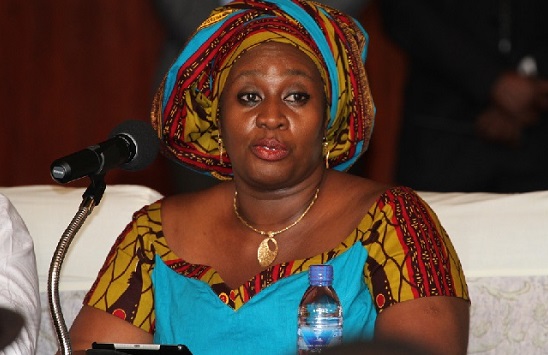 Former CEO of Microfinance and Small Loans Centre (MASLOC) Sedina Christine Tamakloe has been charged with eighty counts of stealing and money laundering.

The findings of the investigation has led the Attorney General to charge Ms Tamakloe and Axim with money laundering and stealing.

Some of the counts include:

Ms Sedina Christine Tamakloe Attionu, was the Chief Executive Officer of the Microfinance and Small Loans Centre (MASLOC) from November, 2013 to January, 2017.

Daniel Axim, is the former Operations Manager at MASLOC. MASLOC is a government agency set up to assist small and medium scale businesses with low interest loans.

Investigations revealed that in June 2014, MASLOC invested a sum of GH¢150,000 in Obaatanpa Micro-Finance Company Limited (Obaatanpa), a licenced Tier II microfinance company located at Ejura in the Ashanti Region.

Thereafter, Ms Tamakloe offered Obaatanpa a further investment sum of GH¢500,000. As a result, a MASLOC Agricultural Development Bank (adb) cheque dated 24th July 2014 in the sum of GH¢500,000 was drawn in favour of Obaatanpa.

Soon after Obaatanpa received the MASLOC cheque, Ms Tamakloe informed the Board Chairman of Obaatanpa that the investment amount of GH¢500,000 would attract 24% interest.

Obaatanpa decided to return the amount to MASLOC since the interest rate being demanded by the accused person was too high and unprofitable for its business and issued a cheque in refund of the loan amount.

Upon presentation of the cheque, Ms Tamakloe declined to accept the cheque and made a demand for a cash refund.

A cash amount of GH¢500,000 was delivered to Ms Tamakloe by the Board Chairman of Obaatanpa on the night of 28th August 2014 at the Baatsona Total Filling Station located on the Spintex Road in Accra.

By a letter dated 28th August 2014, the 1st accused person acknowledged receipt of the refund sum.

In 2015, per letters some of which were under the hand of Ms Tamakloe, MASLOC made demands on Obaatanpa for the payment of interest on the principal investment sum of GH¢500,000.

In response to the demands, Obaatanpa wrote a reminder to MASLOC concerning the payment of the loan amount and drew Ms Tamakloe's attention to the unjustified demands whereupon the demands stopped.

In 2017, upon the assumption of office of a new Chief Executive of MASLOC a demand notice was again sent to Obaatanpa for the payment of accrued interest on the same investment sum of GH¢500,000 whereupon Obaatanpa once again informed MASLOC that the money had already been refunded since 2014.

Investigations subsequently showed that MASLOC had no record of the amount having been paid to it and that the 1st accused person had appropriated the amount of GH¢500,000.

Sedina Christine Tamakloe Attionu, on or about 28th August 2014 in Accra in the Greater-Accra Region dishonestly appropriated the sum of GH¢500,000.00 the property of Microfinance and Small Loans Centre (MASLOC).