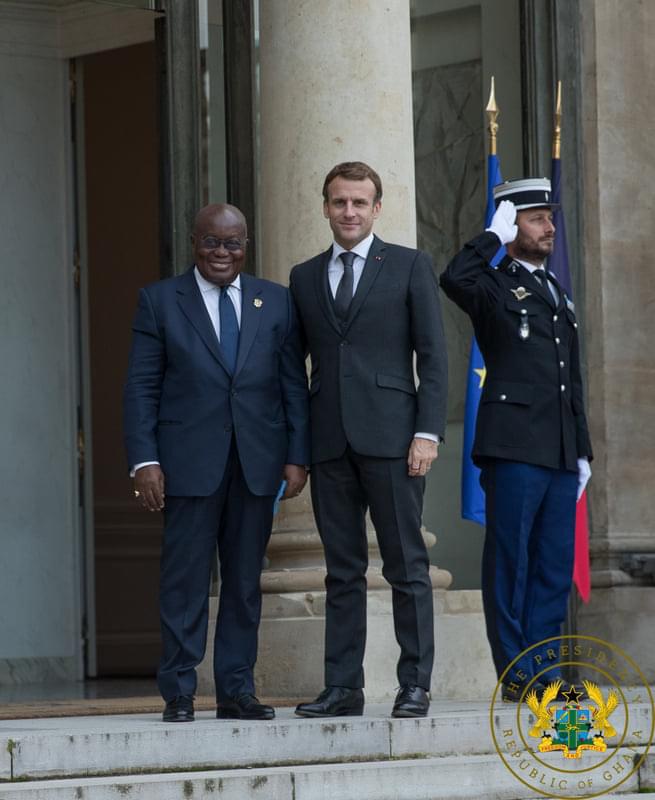 President Akufo-Addo has congratulated Emmanuel Macron on his re-election as President of France.

In a Facebook post, Akufo-Addo said "Warm congratulations to His Excellency Emmanuel Macron on his historic re-election, for a 2nd term, as President of the French Republic."

"I wish him well in the discharge of his mandate, and in the crucial tasks of uniting the French nation and helping to weather the buffeting storms confronting Europe and the world. I am confident that the future of the French people is secure in his hands. I assure him of my and Ghana’s co-operation and continuing friendship."

More than one in three voters did not vote for either candidate. Turnout was just under 72%, the lowest in a presidential run-off since 1969, and more than three million people cast spoilt or blank votes.

Much of France was on holiday on the day of the vote, but the low turnout also reflected the apathy of voters who complained neither candidate represented them. Voters who said they were casting blank ballots told the BBC they wanted to punish the sitting president.

Anti-Macron demonstrators rallied in a number of cities, including Paris, Rennes, Toulouse and Nantes, refusing to accept the result.

In his speech Mr Macron, 44, said his government would have to "answer their choice to refuse to choose".

Far-left leader Jean-Luc Mélenchon, who was narrowly beaten by Ms Le Pen in the first round of voting two weeks before, was scathing about both candidates.

While it was good news France had refused to place its trust in Marine Le Pen, he said Mr Macron had been elected in a worse way than any other president. "He floats in an ocean of abstentions, and blank and spoiled ballots."

Reaction from US and Europe
Mr Macron's victory was welcomed by relieved European leaders, who had feared a far-right candidate offering a series of anti-EU policies.

German Chancellor Olaf Scholz was first to congratulate him, singling out their mutual challenge in responding to Russia's war on Ukraine. US President Joe Biden also said he looked forward to "close co-operation" including on supporting Ukraine.

While Mr Macron has played a key diplomatic role in the war, Marine Le Pen has struggled to shake off accusations of ties to the Kremlin. Ukraine's Volodymyr Zelensky congratulated him as a "true friend" and said he looked forward to a strong and united Europe.

Mr Macron chose a highly symbolic venue from the French Revolution for his victory speech in the Champs de Mars.

Accompanied by his wife Brigitte and leading a group of children, he walked to the stage accompanied by the EU anthem Ode to Joy before promising supporters that "no-one will be left by the wayside". Addressing voters who had backed him to keep the far right out of power he said he would be obliged to them for years to come.

The cost of living crisis facing millions of French people became the number one issue of the election campaign, and the president's opponents accused him of arrogance and acting as a president of the rich.

However, Prime Minister Jean Castex told French radio that the president's re-election sent a strong message, when France was going through a considerable crisis involving "many divisions and a lack of understanding".

For France's political leaders, the next task is to regroup and fight parliamentary elections in June. Mr Macron may have a majority for the moment, but defeated candidates from the first round already have the new campaign in sight and one opinion poll suggests 63% of voters want him to lose his majority.

If that happened, he would be forced into a "cohabitation" with a government led by other parties.

Mr Mélenchon has already held out the prospect of defeating the president's centrist party and becoming prime minister.

In her speech on Sunday night, Ms Le Pen told supporters that the "match is not completely over" and the risks of Mr Macron holding on to complete power were high.