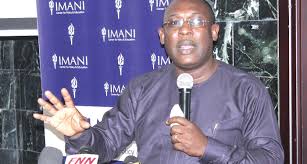 Senior Vice President for IMANI Africa Kofi Bentil says issues emerging from the galamsey fight and its negative impact on the environment has revealed how worse we are running the country.

According to him, these are things we do and at the long end affects our health leading to the death of many.

Speaking on Joy FM on Saturday in reaction to what looks like a lost fight against galamsey and the issue of some missing excavators, Kofi Bentil said he supports Ghana Water Company's decision to shut down some of their plants due to the operations of galamsey.

"I worry that it is true and the evidence that has come up since last two weeks, galamsey reveals what is worse about the way we run this country. We do things that are killing us, Ghana Water Company is shutting down plants and by the way, I support them on that.."

Sharing his views on the way forward, Kofi Bentil said when the issues of galamsey start to affect the citizens they may revolt.

"I think we have to get to the point where galamsey starts biting ordinary people directing then we will have a mass revolt, it shouldn't be so no government wants to have that arrangement but if you have situation where people in a certain locality cannot get water they will charge and start taking the law into their own hands and driving out these galamsey people but must it come to that? no. But if you get to a point where there is nothing else you can do........"

He noted that the citizens have done their part in the fight galamsey because most of these citizens have day jobs but have to take time off to force those paid with taxpayers money to do the jobs they are mandated to do.

"As citizens, I think we are and sometimes I feel ordinary citizens who have day jobs have to take a lot of time to press people who are paid to do these things. Sometimes citizens do more than what they are to be doing and that tells you that maybe the state is failing, we could do and should do more the constitution requires us to do more but we need to get to the point when we can trust the people we put in government and the people we resource to do the work they have accepted to do, nobody begs people to run for public office and too much happens in this country where citizen groups have to get up and push people to what they have to do.: