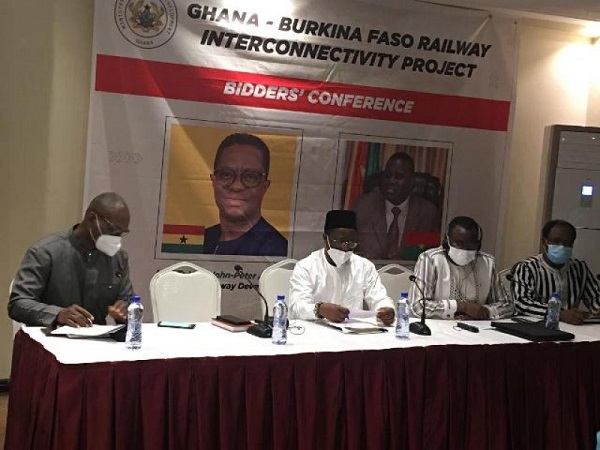 The bidders; China Engineering Company No. 10, African Global Group and Frontline Advisors are expected to present their Technical and Financial proposals after 90 days for evaluation and selection.

Mr John-Peter Amewu, Minister for Railway Development, at a “Bidders’ Conference,” said the vision to have a railway interconnectivity between the Port of Tema and the capital city of Ouagadougou was a key priority due to its importance in accelerating the socio-economic growth and development of Ghana and Burkina Faso.

He said the feasibility studies for the project, which covered the entire stretch of over 1,000 kilometres from Mpakadan to Ouagadougou was completed in June, 2020 after a series of engagements with various stakeholders across relevant sectors in both countries.

“In Ghana, the route or alignment for the railway line is from Tema through Mpakadan, which is currently under construction and expected to be completed by November, 2021.

The line will continue from Mpakadan and will go through Kpeve, Hohoe, Jasikan, Nkwanta, Bimbila, Yendi, Tamale, Walewale, Bolgatanga, Navrongo and Paga. The alignment also includes a branch line from Yendi to Sheini, to facilitate the exploitation of the huge iron ore deposits that have been discovered,” Mr Amewu said.

The Minister said in line with Government’s policy to connect all regional capitals by rail, the Railway Master Plan made provision for a connection to the regional capital cities of Ho, Dambai and Nalerigu whilst in Burkina Faso, the railway alignment would go through major towns like Po, Zabre, Tenkodogo, Manga and Ouagadougou.

He said the second phase of the project development, involving the procurement process for the private sector partner also commenced simultaneously with the conduct of the feasibility studies.

Mr Amewu said a major outcome of the discussions in Ouagadougou was the development of a roadmap for the remaining processes to ensure the commencement of the construction works under a Public-Private Partnership (PPP) financing arrangement.

“It is our expectation that competitive Technical and Financial Proposals will be presented to us in the coming few weeks by mid-July, 2021 and the Joint Evaluation Committee that will be constituted to evaluate the proposals will undertake a detailed analysis to determine the best out of the three (3) for negotiations in the third quarter of 2021,” he added.

Mr Vincent Timbindi Dabilgou, Minister for Transport, Urban Mobility & Road Safety of Burkina Faso, noted that though both Ghana and Burkina Faso had experienced long periods of colonisation, little was accomplished in the railways sector.

He said out of the many railway lines present in both countries, only a few of them were still functional.

Mr Dabilgou said it was important that all actors of the project worked hard to ensure its success and strengthen the interconnectivity between Ghana and Burkina-Faso.

“To undertake this project and ensure its success, we must be good technically and do everything with consideration to achieve cost effectiveness,” he said.

He said the project was expected to be completed within five years.

He said the use of railways for such long journeys would also preserve the roads and ensure their longevity.