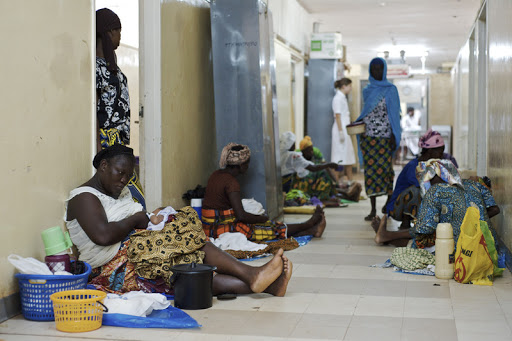 A Facebook post by Member of Parliament for Ningo Prampram, Sam Nartey George, about the death of a 12-year-old boy over the weekend has rekindled a discussion about Ghanaâ€™s failing health system.

According to the legislator, an assemblyman in his constituency sought his assistance on Friday, May 14, 2021, to get his seriously sick son transferred to Accra because the Battor Catholic Hospital in the Volta Region, where the boy had been admitted, was unable to stabilise his condition.

â€œCalls were made to Korle Bu Teaching Hospital but they refused to accept the child that there was no bed. Calls were made to 37 Military Hospital and they agreed to take the child. This was about 3pm. Then the next hurdle began. The National Ambulance Service was called to transport the child. Getting the Service was another issue entirely. After getting the service, they insisted that they cannot move the child until they got their own independent confirmation from 37 Military Hospital. For well over 5 hours, they could not get anyone from 37 to confirm.

â€œIt was at this point the Assemblyman in desperation called me. I quickly reached out to my Colleague and Brother Samuel Okudzeto Ablakwa who is the MP for the area to see if he could intervene with the Battor Clinic. He immediately called Dr. Atuguba who is the Head of the facility and put me in touch with him. It became clear quickly that Battor had done all they could and it was in the hands of 37 Military Hospital.

â€œHon. Ablakwa again called a Constituent of his who is a doctor at 37 to see if he could help us. At this point we had finally gotten an ambulance on standby to convey the child. By the time we got a Doctor at 37 to get involved and give the all clear to the ambulance service, the little boy blacked out and could not be resuscitated. He died at 10:05pm,â€ Sam George recounted the unfortunate turn of events on Facebook.

The long post has so far gotten over 1,600 comments, some hitting back at the legislator on grounds that he and his colleague legislators have failed to pass robust laws to improve Ghanaâ€™s health sector. 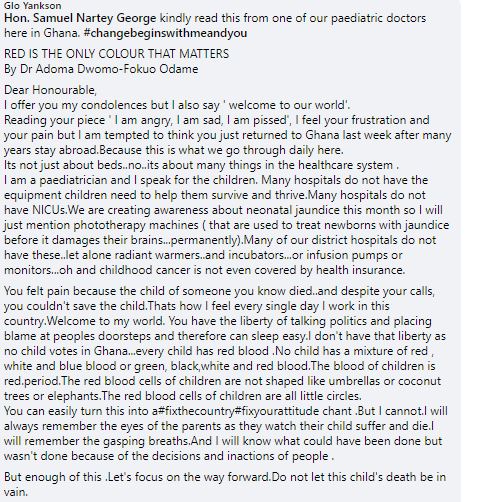 Others, however, recollected their own tragic episodes at numerous under-resourced and poorly managed hospitals dotted across the country.

However, on Monday, May 17, 2021, some Ghanaians called into Joy FMâ€™s Super Morning Show to recount their harrowing experiences at health facilities, some of which resulted in the death of their relatives or friends.

The first caller said his 41-year-old sister, who passed out due to very blood pressure, died at the Greater Accra Regional Hospital (Ridge Hospital) recently because of frustrating administrative processes and lack of professionalism by health workers at the facility.

â€œThe nurses were just there, looking at me. I was screaming: 'Can you help? This girl is dying!' And so, I had to call on people standing by to help me get her out,â€ he described the scenario when his unconscious sister arrived at the hospital in a taxi.

Another caller said Ghanaians must stop paying taxes because leadership is not putting them to good use.

Another caller said: â€œI was lucky. My mother was due for surgery at Korle Bu Teaching Hospital. On the day of admission, the doctor referred us to a particular ward. When we got there, the nurses told me point blank that there is no bed. So I came back to tell the doctor. Luckily for me, my sister is a resident over there so she had a relationship with the doctor. The doctor went back with us to the ward...When he asked the nurse [why my mother had not been admitted], they still told him there was no bed. So he went round to check and saw up to about three beds at the ward. He asked, â€˜what is happening here?â€™ and they said they have reserved the bed for someone who will come on admission the next week...So the doctor said â€˜no way. I am admitting her.' So he instructed one of the nurses to bring her and that is how my mother got a bed.â€

Mondayâ€™s revelations on the popular morning magazine programme culminate an umpteenth time the matter has come up for discussion.

Many health analysts believe that successive governments have neglected the sector because government officials are willing and able to access better healthcare abroad.

Following the death of the 12-year-old boy, a Member of Parliament for North Tongu, Samuel Okudzeto Ablakwa, has called for a policy that will ban government appointees, Members of Parliament among others, from travelling outside Ghana to seek medical attention.

He also believes this policy will force leadership to focus on improving Ghana's health system.