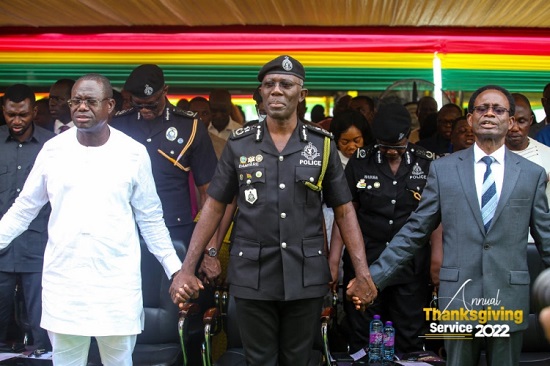 The Inspector General of Police, Dr. George Akuffo Dampare, has showered praises on the Executive Chairman of the Jospong Group of Companies (JGC), Dr. Joseph Siaw Agyepong, for defying the long-held ideology among Christians of just praying, but further launched into production.

This paradigm, according to the IGP, was very crucial, indicating that the Ghanaian Christian can turn prayers into business.

He decried the failure and laxity of Christians to turn what he termed ‘theoretical Christianity’ into practicality.

According to him, the principle of commitment to God held on for many years has not only propelled Dr. Agyepong to just a praying Christian, but has also transformed that into beneficial productive ventures.

He made the remarks at the climax of the joint annual Service of Thanksgiving of the Jospong Group of Companies and Zoomlion Ghana Limited (ZGL) 2022 at the group’s headquarters at Ashaley Botwe – Nmai-Dzorn in Accra on Friday, December 9, 2022.

Dr. Dampare found it very difficult to understand that with a total percentage of 70 percent Christians in the country, Ghana has remained the way it is.

He bemoaned the fact that there was a growing interest among Christians who would only seize any moment in the church against turning theory into producing goods.

He said theoretical Christianity has accounted for the country’s current state in the scheme of world developers.

He indicated that Ghana’s stance as a consumption nation has done no good to her, especially when countries Ghana began with have progressed in terms of development.

He decried why citizens have dwelt on the theoretical aspect of Christianity to retarding both personality and the nation at large.

The IGP indicated that that situation has taken the best part of the individual to the detriment of future generations.

“If after prayer, you can think about eating, then it means everything is not prayer”, Dr. Dampare stressed.

The week-long thanksgiving service was held on the theme: ‘Celebrating God’s Goodness’, and was centred on Psalm 66:16. 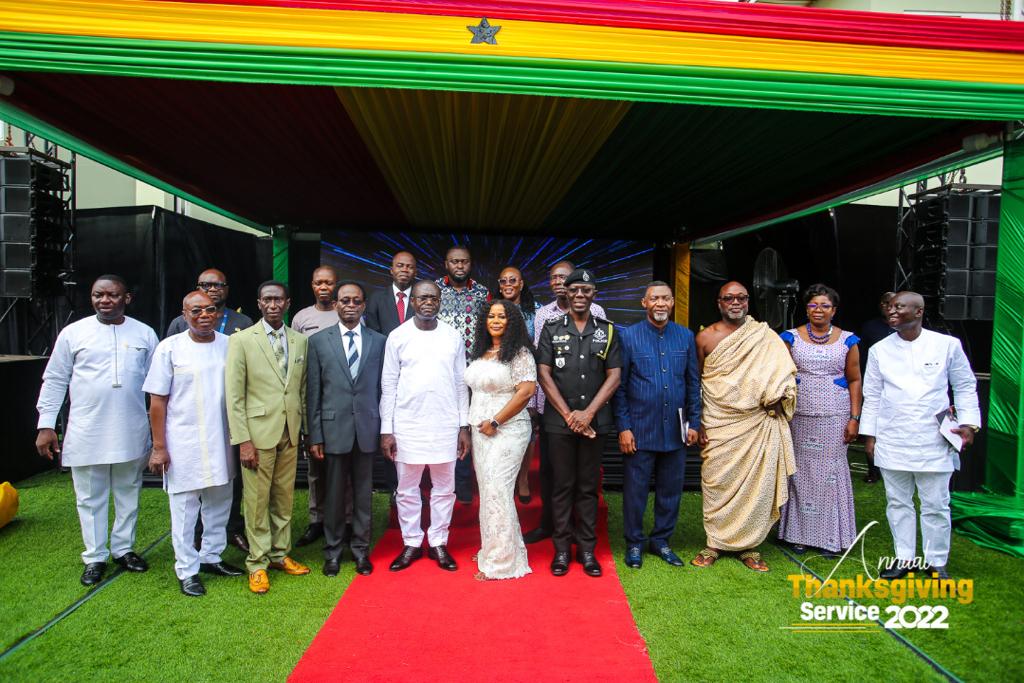 The event attracted special personalities, including the immediate past Chairman of the Church of Pentecost, Ghana Apostle Professor Opoku Onyinah; the immediate past General Secretary of the Church of Pentecost, Ghana, Apostle Dr. Alfred Koduah (rtd.); with Inspector General of Police, Dr. George Akuffo Dampare, as the Special Guest of Honour and his entourage; past and present Members of Parliament; chiefs and queen mothers, among others.

The Executive Chairman of the JGC, Dr. Joseph Siaw Agyepong, used the opportunity to offer gratitude to everyone who sympathised with him during the demise and burial of his father.

However, making a statement on the current challenges that have bedevilled the country, with its corresponding harsh economic challenges, he assured Ghanaians that with a committed attitude, the fortunes of Ghana could be turned around.

Referencing the cost of fuel, of which the impact spares no facet of the economy, he believed that the future was bright – regardless.

He said the current situation should spur the country to do more with home-grown policies while completely curtailing the appetite for excessive importation.

He further urged the government to completely withdraw import cover on other products which the country has the capacity to produce.

This, he said, would serve as an incentive to local producers to step up their drive for production.