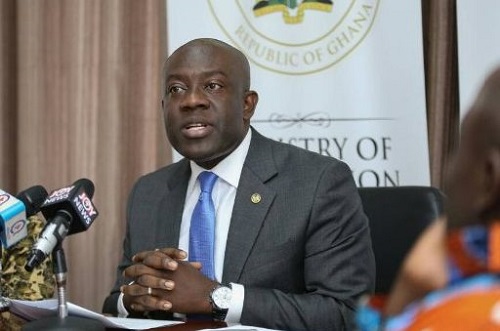 The government has disclosed that the Joy News documentary which alleges that the NPP is training a militia group at the Osu Castle is misleading.

Kojo Oppong Nkrumah, who is the Information Minister, in a press briefing on Friday said the documentary “carried a number of significant misrepresentations and misleading impressions.”

The documentary which comes at a time when there is a national call to disband militia groups had footages of a group called "De-Eye" which has their training base at the Osu Castle.

Mr. Oppong Nkrumah, however, believes the Manasseh piece is misleading.

“Surprisingly, the 20-minute documentary does not show any evidence of such a militia or a vigilante group training or operating at a security zone. Rather it shows a group of young men and women dressed up in white shirts and black suits converging at the Christianborg Castle in Osu in the belief that jobs will be found for them,” the Minister said.

The Minister also said: “government is of the view that this is most unprofessional and very misleading, and we can only urge the producer and Joy News to avoid such misrepresentations in the future.”

The New Patriotic Party (NPP) also distanced themselves from the group and said: "NPP wishes to state UNEQUIVOCALLY FOR THE RECORDS that it has no connection to the purported group shown in the documentary."

The Minority in parliament has taken a keen interest in the matter and called on President Akufo-Addo to resign as they believe he has “lost all moral right” to occupy the high office" due to exposé.

The Minority at a press conference held that the report shook the very foundation of Ghana’s democracy.