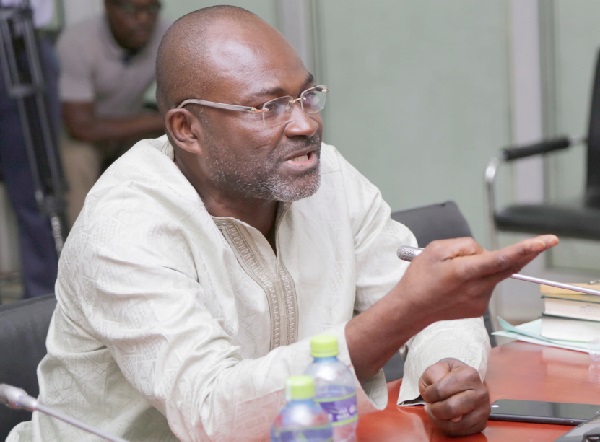 Assin Central MP, Kennedy Agyapong has pleaded not guilty over his alleged contemptuous comments in which he described a judge as “stupid”.

At today’s hearing, Mr Agyapong alleged that Justice Amos Wuntah Wuni will create a situation where he will be biased should he go ahead to hear the case.

He, therefore, wants the case halted.

The legislator risks a possible jail term or fine should he be found guilty of contempt.

He was dragged to the court by Justice Wuni to justify why he should not be severely punished for making some comments regarding a pending case.

His lawyers on September 18 urged the court to halt proceedings.

They explained that an application has been filed at the Supreme Court challenging Justice Awuni’s jurisdiction to hear the matter.

Justice Awuni stated that nothing barred him from proceeding with the case.

The court proceeded to read the charges against the MP and he pleaded not guilty to the charge of contempt levelled against him.

The court afterwards played the controversial recording where the MP used certain insulting words against a Judge of the High Court.

Mr Agyapong's lawyers asked for an adjournment and said they want to return on Monday to listen to the video recording and respond to it appropriately.

His lawyers also disclosed that they have filed a fresh application at the High Court asking that Justice Wuni is restrained from hearing the matter.

They explain that “since his Lordships Amos Wuntah Wuni’s authority to exercise his jurisdiction in the committal proceedings is in issue, it will be bias and prejudicial for his Lordship to be a Judge in his own case in the exercise of such questionable jurisdiction”.

They also insist it is the Attorney General that has the power by law to initiate any criminal contempt proceedings and not the court that is alleging to have been threatened and scandalized.

The lawyers further revealed that they have petitioned the Chief Justice pointing him to the “unfair process emanating from his Lordship Awuni’s court”.

Mr Agyapong’s alleged comments were made in connection with a land matter in which Susan Bandoh and Christopher Akuetteh Kotei had sued him (Kennedy Agyapong), Ibrahim Jaja, Nana Yaw Duodu aka Sledge and the Inspector General of Police.

While the case was still at the Land Division of the High Court (Land Court 12), the MP allegedly scandalised the court on a programme aired on NET2 TV and Oman FM on September 2, this year.

A court order signed on September 9, by Justice Wuni said, "I hereby summon the said Kennedy Ohene Agyapong per a warrant issued under my hand and seal to appear before the High Court (Land Court 12) on Monday, September 14, 2020, at 10:00 a.m. to show cause why he should not be severely punished for contempt if the matters are proven against him to the satisfaction of the court."