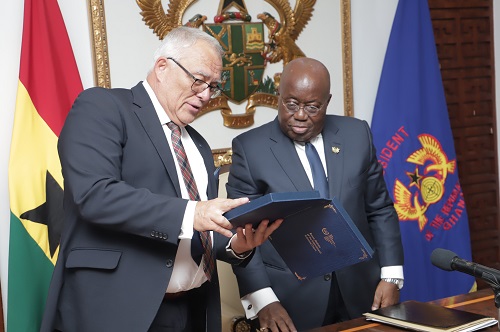 President Akufo-Addo has stressed the need for the global community to help strengthen the International Criminal Court (ICC) to prevent conflicts such as the Russian invasion of Ukraine and the Armenia-Azerbaijan war.

President Akufo-Addo made the suggestion when the President of the ICC, Piotr Hofmanski, called on him at the Jubilee House in Accra Tuesday to discuss issues related to the work of the court.

The discussion centred mainly on how the court should function to improve international justice and peace.

The court focuses primarily on crimes such as genocide, war crimes, crimes against humanity and the crime of aggression.

As a court of last resort, it seeks to complement national courts. The ICC is governed by an international treaty known as the Rome Statute.

President Akufo-Addo stressed the need to give the court universal jurisdiction around the world and entreated global super powers such as the United States and China to support the work of the court.

Citing examples with the Russian aggression in Ukraine and the misunderstanding between Armenia and Azerbaijan, the President said such wars could be prevented if the court had universal jurisdiction

“If we are going to prevent things like what is happening in Ukraine from happening again or what is recently taking place in Armenia and Azerbejan from taking place, we can do so by strengthening the work of the court”

“The more universal in character and jurisdiction it has, the better,” the President said and added that Ghana would continue to support the work of the court

MrHofmanski, on his part, said the court had enjoyed the support of Ghana and expressed the commitment to continue to cooperate with the Ghanaian government.

He said Ghana had provided political and other forms of support to the work of the ICC, even in difficult circumstances.

He enumerated a number of trials in the court from different parts of the world, indicating that the court was gradually becoming universal to address impunity in the world.