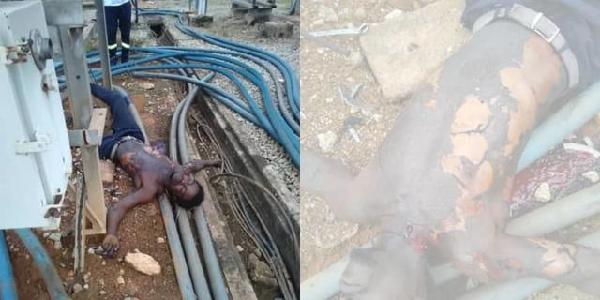 A young man has reportedly died at Ridge in Kumasi after he was electrocuted while in the process of stealing electrical cables.

According to reports, the deceased is said to have tampered with the live cables at the main ECG station at Ridge.

The Ridge station supplies power to the area and major institutions including Komfo Anokye Teaching Hospital.

Sources from the Electricity Company of Ghana indicate that two guys went to Station A Friday dawn to steal bus bar isolators and the first to enter was electrocuted but the other escaped.

The time was suspected to be 1:03 am as there was an outage for ten minutes. Supply was, however, fully restored.

Unfortunately for the thief, the intention to cut and bolt away with the incomer cables was not successful.

According to ECG officials, in the process of cutting the incomer cable, the deceased was electrocuted per the preliminary observations made when he was found.

After the electrocution, he was left with several burns on most parts of his body with the surge of power through his body giving him no chance of survival when he was conveyed to the hospital.

Although power outages occurred in areas such as Ridge, Ahodwo Roundabout, Nhyiaeso, Abinkyi market and its enclave due to the tampering of the incomer cables, ECG managed to restore power to homes and work places.

The Ashanti Regional Director of ECG, Ing David Boadi Asamoah, said electricity is a very good servant but not a good friend.

“So stay in your homes and let electricity serve us. You should not touch any electricity installations,” he appealed.

In recent times, cable thefts have become rampant in the Ashanti Region.

He urged those involved in such acts to desist from the practice.

“Anybody caught will be dealt with in accordance with the law,” he said.