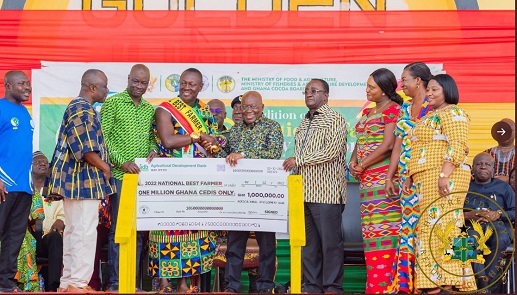 Nana Yaw Sarpong Serebour, a 43-year-old farmer from Juabeng District in the Ashanti Region has been adjudged the national best farmer at this year’s Farmers’ Day celebration in Koforidua in the Eastern Region.

He took home a cash prize of GHC1,000,000 and two nights’ full board complimentary stay for two at the Peduase Valley Resort.

Serebour currently employs over 145 workers and has been farming for over 20 years.

He is currently married with four children and owns a number of farms in the Ashanti Region.

The 38th edition of the National Farmers’ Day was under the theme: “Accelerating agriculture through value addition.”

The first runner-up in the national best farmers’ awards went to Adjei Fosu Seth from Kintampo North. He received a tractor, trailer, ploughs, and sprayer.

The second runner-up also went to Professor Akwasi Asabre Ameyaw from Techiman North in the Bono East region. He received a tractor with other agriculture implements.

The national best female farmer went to Yaa Adjeley from Wassa. She received a cash prize of GHC100,000 and a study tour of Ghana.

Speaking at the event, President Akufo-Addo said plans are far advanced towards the establishment of a tractor manufacturing farm in Ghana.

He is optimistic the initiative will help reduce unemployment and cost of tractors.

“Currently, I am happy to report that processes have been concluded towards the establishment of a tractor assembly plant in Ghana,” the president said in Koforidua.

“This will go a long way to reduce the cost of tractors and improve access to tractor parts and create jobs,” Akufo-Addo said.