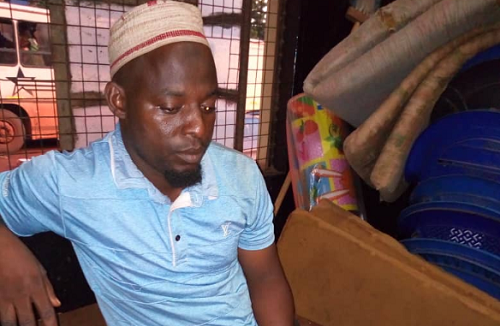 Mohammed Dueshi a district Public Relations officer of the National Health Insurance Scheme (NHIS) for Chereponi, who was arrested after attempting to transport some ammunition to the conflict zone has been remanded into prison custody.

The 37-year old was at the Tamale High Court presided over by Justice Richard Kogyapwah.

The suspect, Mohammed Gushie, who is an official of the National Health Insurance Authority (NHIA), was arrested on his way to Chereponi in the North East Region.

He was charged with possession of ammunition without a valid permit.

Mr Gushie pleaded not guilty to the charge but was remanded into prison custody to reappear on Monday, June 17.

Mohammed Dueshi a district Public Relations officer of the National Health Insurance Scheme for Chereponi, was arrested after attempting to transport some ammunition to the conflict zone.

He was arrested in Yendi on Sunday, June 2 2019, by the Bureau of National Investigations operatives onboard a Metro Mass Transit bus.

The boxes of cartridges which were being transported from Tamale to the conflict zone were concealed under a seat in the bus that was being occupied by a police escort.

The unnamed police officer was said to have told the security personnel at the last barrier to Chereponi that the bus was â€˜cleanedâ€™ hence they should allow them free passage without any search.

However, the BNI operatives upon intelligence that contraband goods were being transported to the area, insisted on searching the bus registered GR 2026 U.

Initial search conducted revealed no such goods, but a thorough sweep of the bus led to the discovery of the boxes of the cartridges which Dueshi was said to have claimed ownership of.