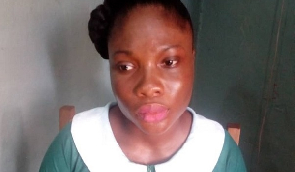 Twenty-three (23)-year-old Nancy Adobea who faked as a nurse with Korle Bu Teaching Hospital and defrauded a prospective car buyer an amount of GH¢3,000 has been arrested by the Nsawam police, according to reports.

According to the police, the suspect revealed that one Ebenezer Kumah of Ntoaso, a village near Nsawam lodged a complaint that about nine months ago,  Nancy had collected the sum of GH¢3000.00 under the pretense of selling a car to him but failed hence needed police support.

On 22nd October 2018 the suspect, Nancy Adobea was arrested in nurses' uniform claiming she is a nurse at Korle-Bu Teaching Hospital.

Her behaviour was suspicious, therefore interrogation was centred on her alleged profession by the police.

She later admitted that she was not a nurse but she wore the uniform to outsmart the intelligence of police to spare her on the crime committed.

She is currently in police detention assisting with investigations.