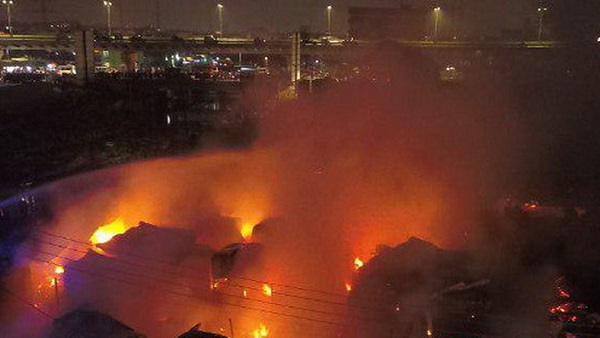 The Klottey-Korley Member of Parliament, Zanetor Agyeman-Rawlings, in whose area the market is located, calls for an immediate structural integrity assessment of the market to avert future outbreaks following a fire that gutted and destroyed about 80 shops.

The incident occured on Wednesday(January 15 2019) night at Circle in Accra.

According to reports, the fire which started around 8:00 pm, was brought under control by personnel of the Ghana National Fire Service with four fire tenders.

Zanetor Rawlings MP of the area in responding to the incident said,''The conversation must happen regarding how people conduct themselves on the market we need to have a look at that, we need to have a sit with the executives of the market with the stakeholders here and come to an understanding with regards as to where or which areas are designated for cooking and which are not ''

The National Ambulance Service was on hand to provide emergency medical services while armed men and women of the Police Service were also present to maintain law and order.

According to reports, the helpless but curious crowd were looking on while firefighters tried frantically to douse the fire.

It was, however, unclear what may have started the fire.

The Executive Secretary of the Accra Metropolitan Assembly’s Task-Force at the Market, Richard Mensah, who was also among the first respondents to arrive at the scene, told Citinews monitored by PrimeNewsGhana narrated how the fire started.

''Around 8.20pm myself and my commander were trying to check whether everybody has left the pavement in which they sell. We got to the entrance of the market and we saw smoke coming out, so we had to rush in with my commander when we got there we realized that there was smoke and it was very dark,so we couldn't ascertain or locate where the firebase is, so what we did was that we started shouting, we shouted and we made sure that then everybody had to leave the place''.

The National fire service says no casualties were recorded.

''As at now, we have not seen any casualties. Men went in with their apparatus to rescue anybody who might have been trapped by the fire but as at now through the search fire and rescue we have not found anybody dead.

Salamatu Adams, an opinion leader at the market wants the Accra Metropolitan Assembly(AMA ) to stop people from sleeping and cooking in the market.

There was a similar fire incident in 2013 at the Odawna Market.