Palmer-Buckle suspends Catholic Priest for refusing to go on transfer 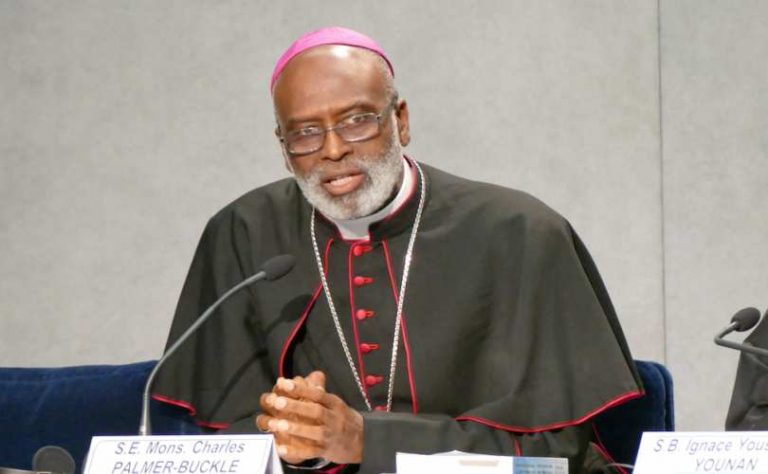 The Cape Coast Archdiocese of the Catholic Church, Most Rev Charles Gabriel Palmer-Buckle has suspended a priest for refusing to go on transfer.

Reverend Father Robert Oduro is reported to have been transferred on January 1, 2022 from St. Paul’s Parish, Assin Jakai to the Archdiocesan Secretariat, Fourth Ridge, Cape Coast, but he failed to honour the transfer and instead established his personal prayer camp.

According to Graphic Online, the suspension came after Reverend Father Oduro received numerous warnings for refusing to respond to Most Reverend Palmer-Buckle’s call for a conversation on the issue.

Suspension per the Catholic Church’s canon law, is a censure by which a cleric is deprived, entirely or partially of the use of the power of orders, office, or benefice.

According to a statement sent to the Catholic community in the Cape Coast Archdiocese, the priest’s suspension which took effect on June 3, 2022, would be held in effect until the Archbishop revokes it at his discretion.

Most Reverend Palmer-Buckle stated that the action was taken after his refusal of transfer effective January 1, 2022, from St. Paul’s Parish, Assin Jakai to the Archdiocesan Secretariat, Fourth Ridge, Cape Coast and his subsequent act of establishing and managing a “Prayer Camp” on his own.

According to Archbishop Palmer-Buckle, the suspension was necessary since the priest’s actions were deemed to be in breach of the church’s standing order.

“I have closely followed the events of your refusal to respond to my invitation to you for further discussion on your Ministry as a Roman Catholic Priest of the Archdiocese of Cape Coast.”

The Archbishop revealed that, he personally visited the Priest on Sunday, April 24, and had later dispatched an official delegation to his Prayer Camp to invite him for further talks.

The embattled Priest, however, failed to honour the invitation.

“You have, however, persisted in your obstinacy and refusal to respond to any call extended to you for a dialogue on the matter. Given these acts of disobedience, I hereby write to suspend you with immediate effect from Ministry as a Roman Catholic Priest and accordingly, I bring this to the notice of the Priests, Religious and the Laity of the Catholic Archdiocese of Cape Coast and to the general public to the effect that you cannot function as a Catholic Priest until this suspension is revoked,” Archbishop Palmer-Buckle stressed.

There have been mixed reactions following the suspension.

A parishioner of St. Paul’s Parish, Beverly Arhin stated that the priest had been absent for almost two months and that, “I heard he has his prayer camp in Mankessim.”

“I was surprised to learn that a Catholic priest had established a prayer camp, but I believe the suspension is intended to dissuade other priests from going rogue,” she added.

A priest who requested anonymity said Rev Oduro’s actions were disrespectful and unwarranted from someone who has benefited so much from the Catholic Church.

“This is someone who has been in Rome for over eight years and when he returned, has had virtually everything at his beck and call. When it comes to serving God, we all have our imperfections, but you must not do it in a disrespectful way,” he told Graphic Online.