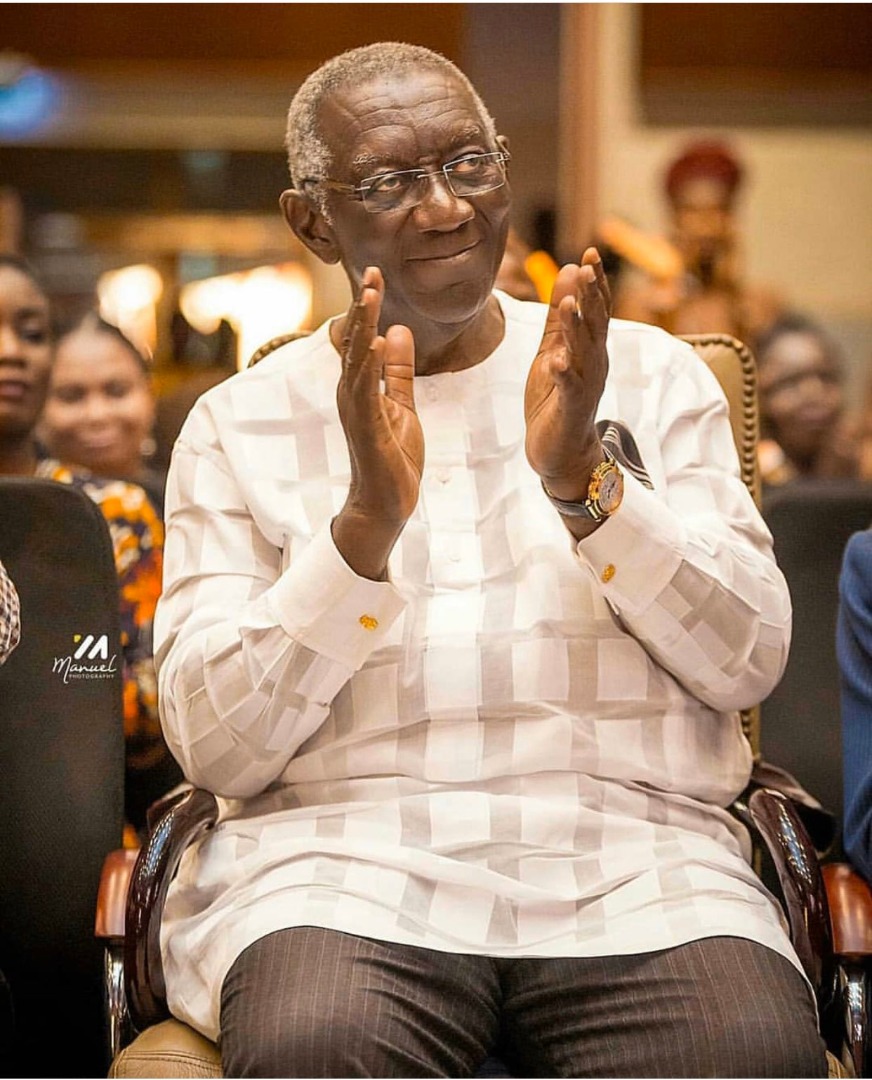 Kufuor was the 7th of 10 children born to Nana Kwadwo Agyekum, a royal, and Nana Ama Dapaah, a queen mother.

He is married to Theresa Kufuor; the couple gave birth to five children.

The former president started his education at Osei Tutu Boarding School in Kumasi from 1951 to 1953 then proceeded to Prempeh College also in Kumasi from 1954 to 1958. He then enrolled at one of the four Inns of Court in London from 1959 to 1961 whence he was called to the English Bar as a Barrister. 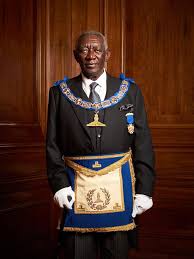 He also attended the prestigious Oxford University in England in 1964 where he earned a masters degree in Philosophy, Politics and Economics.

John Agyekum Kufuor won the year 2000 presidential election as the NPP candidate in the first round, held on December 7; Kufuor placed first place with 48.4%, while John Atta-Mills, Jerry Rawlings' Vice-President, came in second at 44.8%, thus forcing a run-off vote.

In the second round, held on December 28, Kufuor was victorious, polling 56.9% of the valid votes cast. When Kufuor was sworn in on January 7, 2001, it marked the first time in Ghana's history that an elected president had peacefully surrendered power to the opposition.

Kufuor was re-elected on December 7, 2004, with 52.45% with his party also increasing its seats in Parliament.

As President of the Republic of Ghana, the ‘Gentle Giant’ as he is affectionately known, reconstructed and rehabilitated some sports stadia, the Flagstaff House which he renamed Golden Jubilee House and the Accra-Tema commuter railway line.

His major road projects are from Accra-Kumasi, Aflao-Kasoa-Cape Coast, Accra to Aburi, several by-passes in Accra and Kumasi including the Asafo interchange.

The restoration of Peduase Lodge, the drilling of several boreholes culminating in the solution to the then perennial water problems in Cape Coast and Tamale were also major issues he addressed. 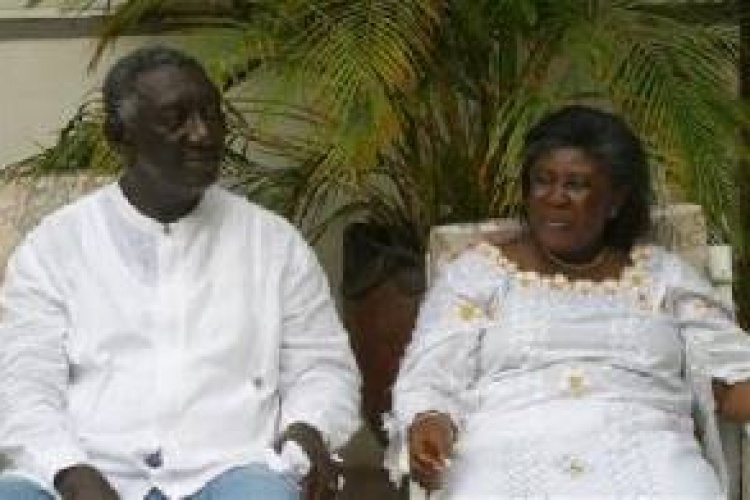 Kufuor also expanded the Aboadze Thermal Plant, built the Kofi Annan Centre for Excellence in ICT, a state-of-the-art wood village at Sokoban in Kumasi for the Anloga carpenters and the accident centre at Komfo Anokye Teaching Hospital (KATH).

He expanded 56 of the best secondary schools into Model Secondary Schools, made them supplied Science Resource Centres and supplied them buses.

Though laudable the model schools became a political weapon later for the opposition when in his own party's 2008 manifesto, the NPP could show only 14 new secondary schools they had built compared to over 200 under 19 years of the previous administration.

He also introduced the President's Special Initiatives (PSIs) mainly through Kwamena Bartels, his minister for private sector development and Alan Kyerematen, his trade and industry minister. The PSIs promoted cassava for industrial starch, oil palm and garments, taking major advantage of the Africa Growth and Opportunity Act (AGOA) of the United States.

In health, the National Health Insurance Scheme (NHIS) to replace the then so-called obnoxious cash-and-carry system was established in his first term. Today, though wobbling, the NHIS boasts of some 11 million subscribers. He also established the National Ambulance Service in response to the May 9 Accra Sports Stadium disaster and built more than 205 hospitals and clinics.

In education, Kufuor institutionalised the capitation grant for school children at the basic level starting with three cedis per child per annum and started the National School Feeding Programme, whereby school children were given one hot meal a day.

He changed the Senior Secondary School curriculum from three years to four years and renamed it Senior High School.

Kufuor also launched the Microfinance and Small Loans Centre (MASLOC), with US$50 million. This made microloans available to the productive population. He further introduced the Livelihood Empowerment Against Poverty Program (LEAP), which provides direct cash transfers to the poorest households in Ghana. 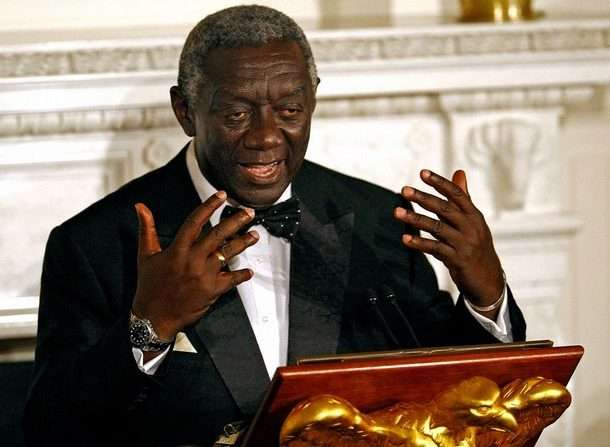 For the first time in Ghana's history, borrowing from banks became so affordable to those with formal employment and even the self-employed; microfinance companies and major banks actually went on to the streets and encouraged small-scale businessmen and women to apply for loans.

His major economic successes, especially in the banking and finance industry, started when he took advantage of the Heavily Indebted Poor Countries Initiative (HIPC) against popular opinion. HIPC resulted in debt forgiveness by bilateral and multilateral Development Partners.

Under HIPC, even though Kufuor inherited a debt of some USD8bn which was then about 70 of GDP, he left office having taken some loans and yet leaving the external debt at USD4bn.

Thus the prospects for the banking sector and private financing was real.

Societe General found it attractive to buy the then Social Security Bank and converted it into SG-SSB, now SG.

UBA, Zenith and Access bank from Nigeria were among foreign banks who arrived and partnered local businesses.

Ghana Telecom which had been struggling to declare profits and pay taxes to the government, the sole shareholder, was initially handed to Telecom Malaysia as Managers and finally in a bold move in 2008, sold in a controversial deal to Vodafone, among concerns over national pride.

That upwelling pride in national assets influenced Kufuor's earlier decision to maintain Ghana Airways. He could not. Later he established Ghana International Airlines which was a major failure; it left a huge controversial debt.

Kufuor's attempt to sell state acquired lands in Accra's Ridge, Cantonments and Airport areas as well as Adum in Kumasi, to outgoing ministers and officials was another major dent on his career. His successor Prof. Mills reverted the airport lands sales and built the new Ministry of Foreign Affairs on it.

Kufuor could not answer questions on corruption with clarity. In the first few months of assuming office, he renovated his Accra Airport West residence with state funds, saying he preferred not to stay in the Christiansborg Castle occupied by his predecessor Jerry Rawlings. He later said a farmer had refunded the 41mn cedis (now 410,000 cedis) state funds on his behalf.

Whilst Kufuor points to roads as a major achievement, his cosy relationship with Anane was seen as a means to award contracts through a reliable crony.

In all these successes and failures, perhaps the one achievement that united the nation was when he released a press statement calling on all his appointees to "prepare their handing over notes and prepare to hand over power". This was at a time when Nana Akufo-Addo, his party's presidential candidate was contesting some runoff election results and the legitimacy of the impending Tain constituency ballot which was to determine some 9000 votes needed for Akufo-Addo to overturn Atta-Mills's lead.

Kufuor is fondly remembered for his frenemy relationship with his predecessor Jerry Rawlings whom he called "Sasabonsam", to wit, Satan after Rawlings had labelled him "Ataa Ayi", likening him to a notorious armed robber.

That "sasabonsam" quip is the only known bad language ever used by the Kufuor on the campaign trail.

At 81, JAK still evokes memories of vigorous and brave campaigning to take over power from Rawlings, a former military leader who had ruled for 19 years.

Kufuor's campaign promos "Gentle Giant", "JAK", "Awurade Kasa" and "We need a man to save Mother Ghana" invented by Jake Obetsebi Lamptey, his preferred campaign manager and strategist of blessed memory, still reverberates in the memories of the middle-aged.