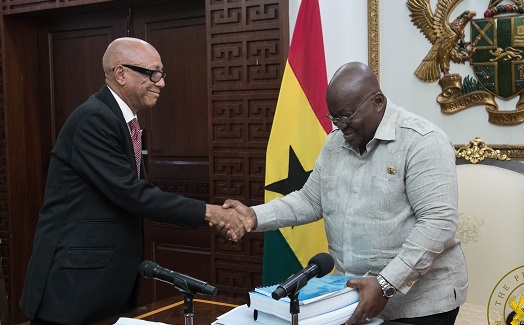 The Ayawaso Commission of Inquiry has presented its reports to President Akufo-Addo.

The report was presented to the President on Thursday, March 14, at the Jubilee House.

The report basically contains findings and recommendations of the commission on the January 31 by-election that was marred by violence.

The President receiving the report said he will pay close attention to the findings and recommendations.

“The findings and the recommendations of the report will be given the greatest possible attention by me and my government.”

He was of the view that the findings and recommendations will help the government in weaning the nation from election-related violence in the country.

Chairman of the Commission Justice Emile Short did not reveal details of the report but said he is optimistic that the recommendations will be implemented.

The Commission was expected to among others, identify persons responsible for the violence and recommend sanctions where appropriate.

The Ayawaso West Wuogon by-election on January 31, 2019, was characterized by violence.

This led to shooting and subsequently the injury of some 13 people believed to be NDC members.

This made the President set up a Commission of Inquiry to probe the incident.