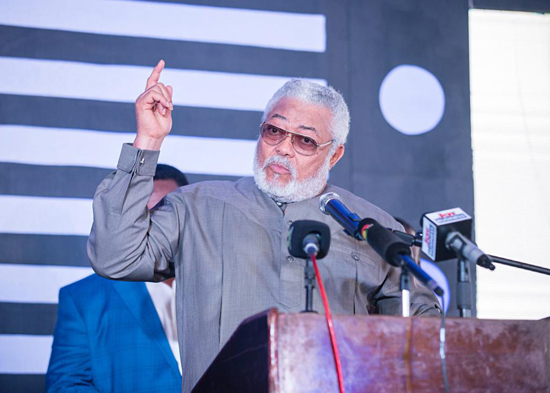 The former President said he was pleased to note the commitment of the fisheries authorities in partnering with the security agencies to stem the tide of abuse of our territorial waters by large-scale fishing trawlers.

READ ALSO: Western Intelligence almost succeeded in burying me alive after I handed over to Limann - Rawlings

“The abuse of our waters by these fishing trawlers has gone on for decades with some political leaders indirectly sponsoring such willful abuse of our limited fishing resources. The industry has been on its knees for a considerable period and I pray the exercise to stem the tide will be sustained to restore sanity into the industry,” he said.

Gyinam Fisheries Limited was slapped with the fine following the arrest and detention of its fishing trawler Ly Rong Yuan Yu for illegal fishing.

The trawler when inspected by a joint team from the Fisheries Enforcement Unit, Ghana Navy, Marine Police and the Ghana Maritime Authority had hundreds of slabs of frozen mixed small pelagic fish species known to be below the minimum landing size. Undersized mesh not approved for fishing in our waters were also located onboard the trawler.

Following the arrest, Gyinam Fisheries was charged and arraigned for court. An out of court settlement led to the $1 million fine and a GH¢124,000 fine for the fish found onboard the vessel.

It will be recalled that in July this year former President Rawlings commended the authorities for imposing a two-month ban on fishing by industrial trawlers in Ghana’s territorial waters.

Rawlings said a lot of fraudulent activities had taken place in the fishing industry in the recent past and it was important that such activities are properly investigated, as it led to the proliferation of trawlers in our coastal waters.