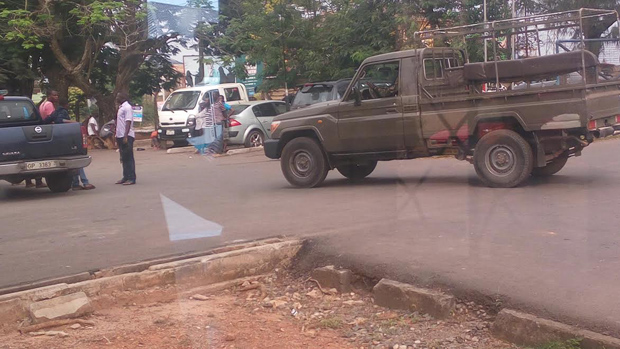 About 20 personnel of the Ghana Air Force base in Takoradi yesterday went on rampage at the Kwesimintsim Police Station in the Western Region, attacking two police personnel on duty.

The police personnel, who sustained various degrees of injury, were attacked purportedly with clubs and metal hooks.

Their names were given only as Corporal Appiah and Sgt Asantewaa.

One of the victims showing his injury

It was gathered that Sgt Asantewaa suffered the most serious injury as one of her legs got swollen, while Corporal Appiah sustained some abrasions on his back.

They were all rushed to the hospital where they were treated and discharged.

DAILY GUIDE gathered that the rampage was ignited by the detention of one Kofi Frimpong, a United Kingdom (UK)-based Ghanaian, who is believed to be an officer of the British Army. 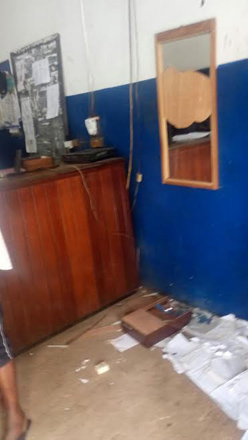 A dressing mirror and sheets of papers destroyed

According to sources, Kofi Frimpong was detained at the Kwesimintsim Police Station after he was arrested by members of the police patrol team for dangerous driving at Kwesimintsim.

Narrating the incident to DAILY GUIDE in an interview, a credible source at the police station said that last Saturday at about 11pm, the police patrol team arrested the British military officer driving a vehicle with registration number AS 2959-09 and was sent to the Kwesimintsim Police Station.

While at the counter-back, Kofi Frimpong allegedly called a relative with the Ghana Air Force in Takoradi and informed him about his arrest.

The source at the station told DAILY GUIDE that a few minutes later, one Flight Officer Joseph Appiah, together with about six others, stormed there and demanded the release of the arrested supposed British military officer.

The source added that the two police personnel on duty said that they could not release the man because the arresting officer was not around.

“Then all of a sudden, the military men became infuriated and subjected the two police personnel to severe beatings with clubs and metal hooks,” the police source indicated.

The source continued, “The police woman sneaked out and blew a whistle to alert their colleagues at the barracks and summon them for assistance.”

The source disclosed that police personnel at the barracks rushed to the scene and managed to arrest seven of those who purportedly assaulted their colleagues and detained them together with the said British military officer.

They purportedly vandalized anything they set their eyes on, including dressing mirrors, tables and chairs, as well as sheets of paper believed to be containing statements taken from suspects.

When DAILY GUIDE visited the police station yesterday afternoon, it was revealed that senior police and military officers in the Sekondi-Takoradi metropolis were in a crunch meeting discussing the way forward.

From Accra A.R. Gomda reports that the Chief of Defence Staff, Air Marshal Michael Samson-Oje – currently out of the country – upon hearing the story, directed the Chief of Air Staff, Air Vice Marshal Maxwell Mantsebi-Tei Nagai, to wade into the matter.

The Chief of Air Staff, in a telephone chat with DAILY GUIDE yesterday, explained that the Air Force Base Commander, Felix Asante, was on top of the matter.

According to him, a Flying Officer of the Ghana Air Force went to the Kwesimintsim Police Station to demand the bail of the visiting British officer, who is his (Chief of Air Staff’s) guest.

He said the police personnel declined and maltreated him, even after identifying himself as a Flying Officer of the Ghana Air Force.

According to Chief of Air Staff, when the Flying Officer left the Kwesimintsim Police Station, he returned to the barracks to narrate his ordeal at the hands of the cops to his subordinates.

“On his blind side, the soldiers mobilized themselves and proceeded to the police station, the result of which is what we have on our hands now,” he asserted.

The defaulting soldiers, he stated, were being sought and would be dealt with according to military regulations.

The Base Commander, Grp Capt Felix Asante, is on top of the matter, the Chief of Air Staff claimed, adding that the “relationship between the police and the military has always been cordial since the days of the CDS as the Base Commander in Takoradi and my tenure.”