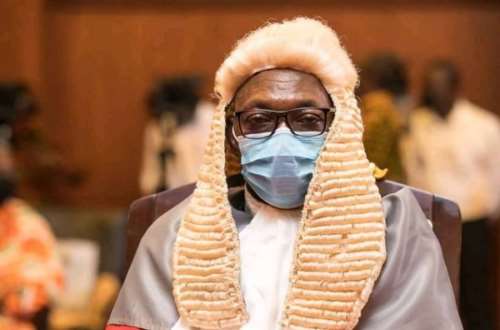 The Supreme Court has in a majority decision stopped Justice Clemence Honyenuga from continuing with the trial in which Dr Stephen Opuni and two others are standing trial at the High Court.

The five-member panel of the apex court in a three-two majority ruled that Justice Honyenuga, a Justice of the Supreme Court is prohibited from continuing with the trial.

Dr Opuni and two others have pleaded not guilty to charges including causing financial loss to the state in a lithovite fertilizer issues.

The panel of five presided over by Justice Jones Victor Dotse also granted the request for portions of the ruling on a submission of no case to be quashed.

The reasons of the court will be made available at the registry of the Court on Friday, July 30, 2021.

On July 13, lawyers of Dr Opuni, the former CEO of COCOBOD told the Supreme Court how one of two evidence which gave contrasting accounts on Lithovite fertiliser was rejected by Justice Clemence Honyenuga, as he seeks the judgeâ€™s removal from the COCOBOD case.

Moving the application for Justice Honyenuga, Justice of the Supreme Court to be prohibited from the case, Samuel Codjoe lead lawyer for Dr Opuni argued that, â€ a statement given by a farmer which said Lithogite fertiliser was good was rejected and another one which a farmer said Lithovite was bad was accepted.â€

He contended that, the accused person sense a possible bias and would not be given fair hearing if the judge is allowed to continue with the case.

Lawyer Samuel Codjoe argued that, the motion was to invoke the supervisory jurisdiction of the Supreme Court.

â€œWe are asking for Certioari to quash part of the the decision to of the court to dismiss our submission of no case and also prohibition of the judge from going on to hear our case based on unfair comments and possible bias.â€

Counsel argued further that, there was a breach of natural justice when they were not given the opportunity to be heard when rejecting some documents which strengthen the case of his client.

He contended also that, the court acted contrary to Section 8 of the Evidence Act, which requires a trial judge to hear the other party on objections to fulfil natural justice.

He also argued that, â€˜We were not given enough time as per Article 19 of the 1992 Constitutionâ€ which required an accused person to be offered adequate time and facility to prepare his defence.

He said, it was clear from the way tue trial is being conducted that, the case before the court has been predetermined and prejudged and so his clinet would not be given fair hearing.

Opposing to the motion, Alfred Tuah-Yeboah, Deputy Attorney General, submitted that the applicant has failed to meet the required threshold of the court to grant him his request.

According to the Deputy AG, the applicantâ€™s case that there was an error on the face of the court ring has not been demonstrate.

According to him, no grave fundamental error has been occasioned which warrants the Supreme Court to grant his request as per the ruling on his submission of no case.

He argued that, in any event, the trial judge at that stage, was only deciding that, a prima facie case has been made and he was under a duty to evaluate the evidence before him.

On the case of bias, the Deputy AG said, the Court was fair to the accused and no case of possible bias was established.

He prayed the court to refuse the application.