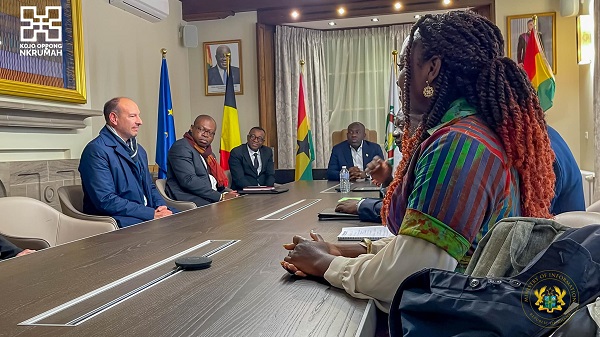 Minister for Information, Kojo Oppong Nkrumah has called on the European Union (EU) to work with African, Caribbean and Pacific (ACP) countries to prevent its proposed ethical and sustainable supply chain rules from becoming a burden for the local cocoa and coffee industry.

According to Mr. Oppong Nkrumah, though the new legislation is a way to drive better practices within the cocoa and coffee subsector, more importantly, the EU must work with ACP countries in achieving the required sustainability standards else, it risk putting players within the value chain out of business.

He made the call when he chaired a two-day forum on the future of Ghanaian cocoa and coffee value chains in the face of the new EU legislation on the ethical production of cocoa and coffee at the “Alliances in Ghana: Coffee and Chocolate at the table” in Brussels, Belgium organized by the International Trade Centre (ITC) and the Ghanaian Mission in Brussels last week.

“At a time where farmlands are coming under threats for competing and more rewarding economic activities, sustainability is a matter that requires some more attention. By no means however should sustainability be used as a pretext to limit market accessibility. Exchange of best practices and technical assistance is necessary so that we can have a win-win situation in all of this.

“Farmers deserve a recompense for their hard work and should not be left out in any business or policy negotiation. Their social reality and cultural context must be considered when designing legislation so they may meet their demands and not bear a disproportionate burden for complying with the regulation,” he said.

EU lawmakers have backed a proposal for a law that will ban the sale of agriculture products linked to the destruction of forests, and human rights violations. The bill was supported by 453 votes, to 57 with 123 abstentions. The EU Parliament will now start negotiations on the final text with EU member states.

Once approved, the law would force companies and producers to give assurances that products are deforestation-free and meets EU’s sustainability standards. Businesses will be forced to verify that agricultural goods sold in the EU have not been made on deforested or degraded land anywhere in the world.

This, Mr. Oppong Nkrumah said could soon make Ghanaian cocoa and coffee unexportable to many international markets within the 27-nation bloc.

He said Ghana must act quickly to ensure the two industries meet the interests of European markets else millions of households and the economy in general could be significantly affected by this proposed legislation.