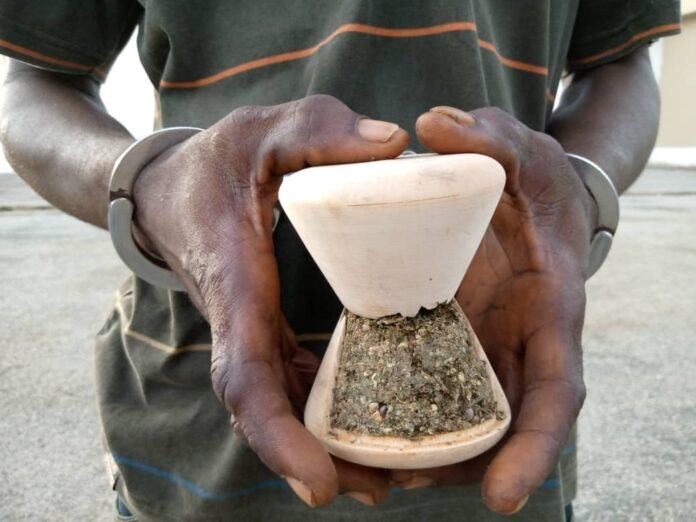 Two persons have been arrested by Prison officers for attempting to smuggle marijuana and cocaine into the Ankaful prison in Cape Coast in the Central region.

Reports revealed that the two suspects, a male and a female â€“ John Mensah and Margaret Amponsah â€“ were arrested after they hid the drugs in food meant for an inmate.

Margaret Amponsah revealed that one Desmond Asamoah who is believed to the owner of the narcotic drugs sent them to give the food to an inmate. According to her, that was not the first time they have been sent to give food to the inmate.

The suspects narrated that the owner of the narcotics parcelled the drugs in a sack and a Ghana must go bag and directed them to give it to one John Mensah but according to her, they didnâ€™t find out exactly what was in the bag.

Upon reaching the premises of the Ankaful prison, the prison officer decided to see what exactly was in the bag. They saw earthenware, eggs, pestle, wrapped food, and several other items but upon a closer search, they found the marijuana and cocaine hidden in the earthenware.

The Prisons officer quickly arrested them and detained them.

Upon interrogations, one of the suspects confirmed that the items were given to her by her husband.

Four mobile phones were also found hidden in one of the food and according to the suspect, she was unaware of the narcotic drugs in the food.

The incident happened in the early of Saturday, 1st May 2021.

The Central Regional Prisons officer PRO Supt. Vicent Ziniel said people have been trying to smuggle drugs and other items into the prisons for inmates.

According to him, most of the people who always attempt to smuggle drugs into the Ankaful prisons come from Mankessim in the Mfantseman Municipality.

He finally, warned the general public to desist from smuggling narcotics drugs into the prison.