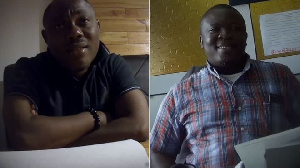 The University of Ghana has defended its sanction against Professor Gyampo and Dr Paul Butakor following their suspension in connection with the BBC documentary Sex for Grades which was released last year.

The two are currently serving a six and four months suspension respectively without pay after being implicated in the BBC's Sex For Grades documentary. The two suspended lecturers will also undergo appropriate training on the University's sexual harassment and misconduct policy.

But the lawyer for the two suspended lecturers,Â Francis-Xavier Sosu stated that considering the other sanctions attached to the suspension, the action is too harsh.

Responding to the statement of Lawyer Francis Sosu on Starr FM today, Chairperson of the Anti-Sexual Committee of the University of Ghana Margaret Amoakohene said the sanctions are justified

''You can only appeal to the authorities if you want mitigation of the sentence given to them. The University went through its processes and I don't know what they mean by they haven't been found guilty of the issue. The fact-finding committee did not find them guilty for Sex For Grades, but the University has found them guilty of misconduct''.

''What we saw in the video was misconduct and we have said this right from the word go and I don't think the lawyers can determine for the University what the sanctions should be with that the punishments are justifiable. If they have anything to say, they should say it to the University and appeal. If they knew there was something wrong why did they accept the University's punishment meted out to them and they are ready to abide by it. I can only advise them that they know the right source to go if they have any input as to how this sentence can be mitigated''.

Again, the University of Ghana said the institution hopes the suspension of Professor Gyampo and Dr Butakor over the BBC Sex for Grades scandal will serve as a deterrent to potential offenders.