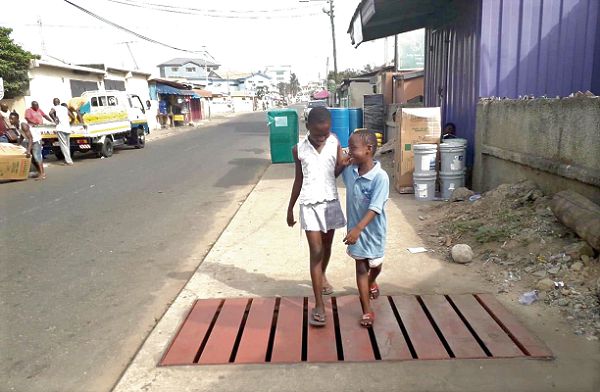 The Department of Urban Roads (DUR) has contracted two metal grating installation companies to replace stolen, old and rusted metal gratings covering the openings of drains in Accra and Tema.

The 12-month project, which started in late November 2018 and will be completed in November 2019, is being executed by Carlwas Company Limited and Mentoring Ventures Limited.

The two firms are also to repair damaged concrete slabs to restore safety on pathways along a number of streets in the national capital and Tema.

Some of the areas that will benefit from the project are the central business district, Abossey Okai, Teshie, Nungua, Spintex, Asylum Down and the Barnes Road from the Trades Union Congress (TUC) building to the Holy Spirit Cathedral at Adabraka, all in Accra, and Sakumono in Tema.

Storm drain openings are created during construction to allow the dislodging of drains to allow the free flow of flood water.

The Greater Accra Regional Director of the DUR, Ms. Adwoa Duku, said the project forms part of the routine maintenance carried out by the department.

“The covering of open storm drains, underground utility vaults and other drains in Accra and Tema is very important to the department,” she stated.

A number of people at Adabraka yesterday were happy that they now could use the streets without any fear of falling into uncovered drains.

They said the openings in the drains were death traps and commended the authorities for doing the right thing.

Prince Acheampong, an eight-year-old pupil of the St Joseph RC Basic School at Adabraka, who once fell into an uncovered opening, said he could now safely walk on the covered drain without fear of falling through an opening.