We have revived Ghana's economy - Bawumia 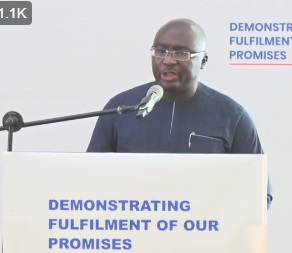 Vice President, Dr Mahamudu Bawumia said the country's economy has been revived following the implementation of series of measures instituted by the governing NPP.

He made this comment at the first town hall meeting for this year (2020). The event was held at the Ashanti Regional Capital, Kumasi is under the theme '' demonstrating fulfilment of our promises''.

Addressing the meeting,today Dr Bawumia said: ''We have analyzed the economy before we came, we analyzed these problems and talked about them and put forward solutions which were largely captured in our 2016 election manifesto. Some of the problems that existed in the economy, many of which were worsened following the 8 years of the NDC government included declining economic growth, rapid accumulation of the debt under their government. After 3 years in office, the results of the physical consolidation are evident and data shows that significant progress has been made to restore macro stability and economic growth. The growing confidence in the macro economy owes a lot to the prudent management of the public finances and monetary affairs over the last 3 years''.

He also stated that : ''To underpin physical discipline going forward ,Ghana has for the first time in history passed into law a fiscal respinisblity Act that limits the fiscal deficit in any year to a maximum of 5% of GDP''.

READ ALSO: Banking sector would have collapsed if NDC were in power - Bawumia

Again, the Vice President also made it clear that when it comes to the management of the cedi the NDC has no moral right to accuse them of performing badly in government.

Dr Bawumia also said from 1993 to 2017, the first three years of every government the NPP has done better than any other government.

He gave the figure of 8.73% as the depreciation percentage that the NPP has secured so far and indicated that in 2016, for instance, the NDC was having a record of 18.0 % when it comes to Cedi depreciation and so there is nothing that the NDC can accuse them of performing badly in terms of managing the Cedi.