Why he home-schooled his son, father of 12yr-old boy who gained admission to UG explains 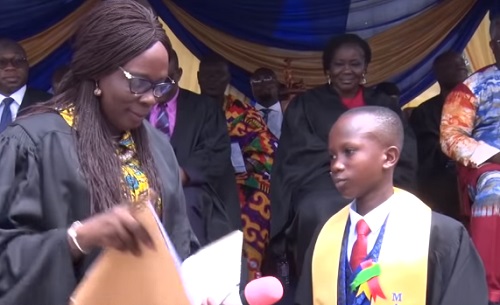 Father of a 12-year-old boy who gained admission to the University of Ghana, UG has explained why he home-schooled his son.

According to Robert Bamfo, as an administrator he wants students to be independent and confident.

Viemens Bamfo, a 12-year-old boy who was home-schooled by his father has gained admission at the University of Ghana’s Distance Education School.

Viemens Bamfo was pulled out of school after lower primary.

His father, Robert Bamfo has been tutoring his son for the past 3 years in various subjects which prepared him to sit for the West African Senior School Certificate Examination (WASSCE) for private students, popularly known as Nov-Dec, which he passed.

The 12-year-old boy is currently studying Public Administration at the University of Ghana Distance Education School as he aims at becoming the president of Ghana by age 40.

Viemens is not the only beneficiary of homeschooling. His senior brother, 20-year-old Edwin Bamfo also went through the same training and has since completed the Kwame Nkrumah University (KNUST) with Upper-Class honours in Environmental Science.

Viemens was part of some 2,900 students pursuing various courses at the University of Ghana’s Distance Education School who were matriculated on Saturday, October 26, 2019.

Speaking on Joy FM, Robert Bamfo said his focus is to make his children very independent in their quest to acquire knowledge.

"I had returned from my master's programme in Senegal and I pursued Banking and Finance and French, when I returned at a point in time I had to work with my in-law who had a school so as an administrator of the school I thought that we needed to do certain things differently from the way things are been done and my inlaw who is a trained teacher would not agree with me so I took a decision that I will have to use my kids to visualise what I intent doing and if anything comes out it then it will be a proof, initially there were differences between my family but I stood my ground knowing very well that it is going to be difficult to share a vision that I have seen clearly that if I needed to give my kids comparative advantage then I needed to do things differently.

I started with my firstborn, I pulled him out of school at age 12 every dawn I will wake him up teach him from 3 up to 6 am then I will leave him to plan his day the way he wants to, and then in the evening we will meet and review what he has done, I was assessing his level of independence, that he should be able to look up things he does not understand like pronunciation and I see his confidence level has improved that was the beginning.."

Robert Bamfo also highlighted the need for language to be taken seriously because it forms the basis of every field of learning.