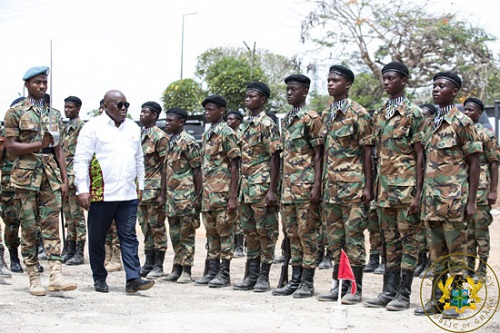 President Akufo-Addo speaking at the 109th-anniversary celebrations of the Adisadel College in Cape Coast on Saturday said any student of the school can contribute to the development and growth of the nation irrespective of their circumstances.

The President charged young men in the country to live a diligent life so they can help build Ghana in their own small ways.

The President was the special guest of honour for the 109th-anniversary celebrations of the Adisadel College, one of Ghana's premier Senior High Schools.

“Any young boy from any part of the country, who applies himself diligently, can, in spite of his circumstance, dream of also becoming a Santa Clausian, and contribute to the growth and development of Adisadel and of our country.”

He added that the government's plans to run a free educational system is to help build up young men and women who can contribute immensely to the development of Ghana.

“It gladdens my heart that we, in Ghana, are now able to say that education in the public sector is free from Kindergarten to Senior High School. Ghana is proud to be a part of the nations in the world granting unfettered access to Senior High School education to all school-going children, a path that has been trodden by successful nations like the United States of America, Singapore, Finland, Canada, Japan, Korea and Malaysia,” the President said.

The introduction of the Double-Track calendar system, President Akufo-Addo stressed, is a temporary measure, aimed at ensuring that no student was denied the opportunity to further his or her education.

“The construction of new facilities and expansion of existing ones in the four hundred (400) High Schools, running double track, are progressing steadily, made possible by a $1.5 billion GETFund securitization initiative,” he said.

President Akufo-Addo with one of the award winners

The President also revealed that the construction of a two-storey classroom block and two-storey dormitory block will commence in the school as a double track facility intervention.

“Within two weeks, contracts are going to be awarded for the construction of a two-storey classroom block and a two-storey dormitory block as a double track facility intervention. This will be in addition to the completion of the dormitory block and the classroom about which much has been spoken. We will, in due course, phase out the double track system without loss to anyone’s education.”

President Akufo-Addo with some of the  alumni of Adisadel College

The President said his government remains committed to the development of a free, fair society in which all persons, irrespective of economic circumstances and social barriers, are able to access education, acquire skills, and contribute effectively to the progress and prosperity of our nation.