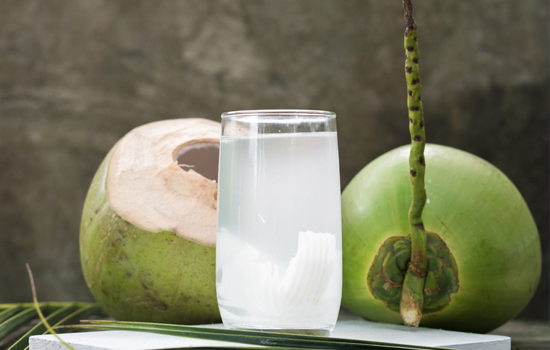 Itâ€™s tasty, refreshing, and also be good for you.

Whatâ€™s more, itâ€™s loaded with several important nutrients, including minerals that most people donâ€™t get enough of.

Coconut water is a good source of calcium. Hence, it may promote bone health.

Unlike any other beverage on the market, coconut water contains five essential electrolytes that are present in the human body. These include calcium, magnesium, phosphorous, potassium, and sodium. Because of its unique composition, coconut water can be enjoyed by individuals with varying medical conditions.

Coconut water may be the perfect beverage for restoring hydration and replenishing electrolytes lost during exercise.

Electrolytes are minerals that play several important roles in your body, including maintaining proper fluid balance.

They include potassium, magnesium, sodium and calcium.

However, another study comparing high-electrolyte beverages found that coconut water tended to cause the most bloating and stomach upset.

Coconut water prevented crystals from sticking to the kidneys and other parts of the urinary tract. It also reduced the number of crystals formed in the urine. Researchers believe that coconut water helped reduce free radical production that occurred in

Drinking enough fluids is important for kidney stone prevention. Although plain water is a great choice, one study suggests that coconut water may be even better.

Kidney stones form when calcium and other compounds combine to form crystals in your urine these can then form stones. However, some people are more susceptible to developing them than others in a study in rats with kidney stones, coconut water prevented crystals from sticking to the kidneys and other parts of the urinary tract. It also reduced the number of crystals formed in the urine.

In many instances, a disproportionate level of electrolytes can result in high blood pressure. Because coconut water contains an adequate supply of each, it can be used as a balancing mechanism. In some instances, it is recommended that coconut water be consumed at the start of each day to foster the balance of these electrolytes.