7 signs that prove you are his side chick 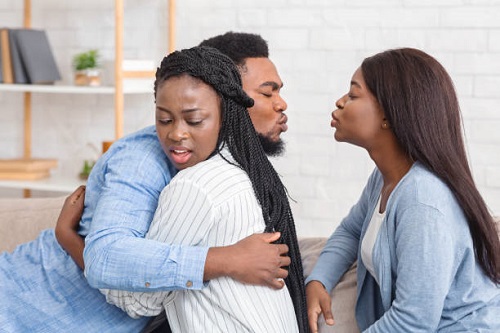 7 signs that proves you are his side chick
Shares

It’s easy to assume that you are the main chick because some men or maybe your man too have perfected the dark art of deceit. So you go ahead in your little happy world loving him exclusively.

There are obviously a lot of side chicks who do not know their real place.

The indicators that you're the side chick in your relationship are pretty recognisable if you allow yourself to see the signs and put two and two together.

Here are some undeniable signs that may prove that you are actually your boyfriend’s side chick.

1. Limited time with you

Does he come up with all sorts of excuses to not spend special moments with you?

The general special days should make you a lot more suspicious - Christmas, new-year, even Valentine’s. These are the most difficult days to excuse one’s self from when you’re in a serious, exclusive relationship.

So if he’s regularly coming up with excuses to miss all of these days, well, chances are that he needs to be with the real one.
No matter how well he treats you, side chicks are still side chicks – a distraction from whatever commitment he already made to another woman.

2. Never shows you off to anyone

Not to friends, not to family or even followers on any social media platform despite having a strong, thriving presence online. There is a case to be made for private men who love to keep their business private.

While we can all appreciate their low-key spirit, we can also agree that it’s a bit unusual, even suspicious to love a whole woman for about six months to a year without anyone knowing about it.

If he’s not introducing you to his world – real or virtual - there’s every need to question that man and his intentions.

3. Overly guarded with his phone

This is some sort of hot issue when it comes to relationships generally. The issue of phones, passwords, gadgets and privacy will always generate divided opinions, of course.

However, there is an undeniable secrecy you’ll sense when someone is trying to hide something. Is he deleting call history, changing passwords frequently, guarding his phone like nuclear codes? There’s a chance that you’re likely the side chick.

Also note that, most cheaters will not let anyone near their phone because doing so will blow everything up. So, if he's smart and cheating, his phone will never end up in your hands.

One of the signs you are the side chick is when he doesn’t talk about the future of both of you. There is no “Us” only “I” and “You”. A relationship with a side chick has no future. It’s merely a fling that isn’t meant to get serious. So there will be no talks of the future from the guy.

Be warned, some guys are upgrading every day and this sign is becoming more obsolete as the days goes by. Nowadays, some guys can lie about wanting a future with you even when they know deep down that the future talk is a lie. It is still worth mentioning because there is still a fraction of men that still exhibit this sign.

READ ALSO: 13 special ways to pamper your woman and make her feel loved

How committed is your man to the relationship? Are you the one doing all the commitments? If he isn’t committed to you, it means he is already committed to someone else and you are just the side chick.

6. You can’t be present for important occasions in his life

Inviting a side chick to an important event is just like shooting ones’ own foot. Epic events are usually filled with loved ones and all those whose opinion really matters a lot.

The reason why side chicks are never brought to such occasions is that the moment you step in, you will know you are just a side chick as everyone who sees your man will ask for the main woman they all know.

If you haven’t done any of this, then be rest assured that you are the side chick.

7. Scared of being seen with you

When your boyfriend doesn’t like you posting his pictures on your social media. He doesn’t like walking down the street with you as a couple, especially his own street. The locations of all your dates with him are kilometres away from his home and the near ones are really secluded.

Things like these only indicate he doesn’t want anyone he knows to see you with him. That’s the reason why he would go to great lengths to make sure you nothing connects you to him.

Another really shady sign to watch out for is when he is constantly on the lookout when you both are outside but totally relaxed with you behind closed doors.

Should you notice this behaviour, you should act accordingly and dump him. Do what's best for you.