9 guys confess how they caught their partners cheating 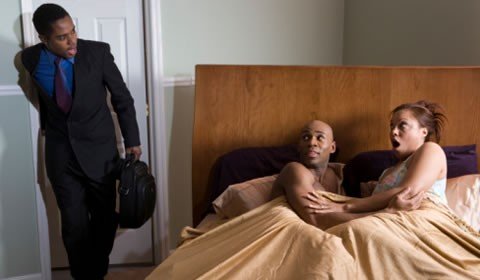 Most people have at least a hunch when they're being cheated on, even if they can't prove it. For these people, the evidence eventually presented itself first-hand—in the form of texts, confessions, and even being caught in-person. Here's how these guys eventually confirmed that their partners had strayed.

1. “I had a feeling something was going on behind my back, just because [my ex] had a lot of ‘late nights working’ and a lot of ‘girls nights’ all of the sudden. I pushed her on the issue a few times, but she denied it. I absolutely should’ve just trusted my gut. But the third time when I pushed her on it and didn’t back down, she just admitted it. I walked out and never talked to her again. I don’t think she even deserved any follow-up or closure or a chance to explain. To me, it wasn’t just that she was cheating with some other guy, it was that she lied to me multiple times. Why even bother with that?” — Adam, 28

2. “It started because I got a text that I was pretty certain was for someone else. She had told me she was sick so she wasn’t going to come over. Then about a half hour later I get a message that she was coming over in a half hour and she was excited to see me. It seemed really out of place. She followed up quickly by explaining away that she felt better for a second and was going to come visit after all, but then threw up again. It wasn’t enough for me to drive over to her place and check on her; I didn’t want to look crazy. I did snoop through her phone later and found enough incriminating messages that I broke it off.” — Charles, 29

3. “I found out through a mutual friend who saw her out with some guy at a local dive bar. She denied it, but the friend really had no reason to lie. After we broke up she started dating the guy she was out at that bar with, so I’m pretty sure I made the right choice.” — Rob, 27

4. “We had been dating for a few months and went to a house party together. I went downstairs to get a drink and she was on a couch hardcore making out with some dude. I didn’t even say anything, just left and never spoke to her again. There were a lot of other unrelated red flags in the relationship that I ignored. That just sealed the deal for me.” — Devin, 26

5. “She started hanging out with a group of friends I didn’t know well and I honestly didn’t like them. We had been dating since we were like, freshman in high school, and I’m pretty sure a part of me knew this was the beginning of the end. I had started to check out myself, too. I kinda figured she was cheating and she eventually confessed it when we broke up.” — Russell, 30

6. “My ex and I moved in together right after college to a city pretty close to where we had gone to school. I had gotten an entry level job in my field and she hadn’t yet, and was making ends meet with a retail gig during her job search. It started to drive a wedge between us. I was trying to be helpful and supportive, but she always thought I was being judgmental. Anyway, I had a half day that I guess she didn’t know about and I came home to her having sex with her coworker. There was this weird moment before I opened the door where I could hear what was going on and I had to decide if I even wanted to see it going down. It only lasted a split-second, but there was still this little self-check moment: ‘You sure about this?’ I whipped open the door and screamed. She’s doing fine now and even tried to rekindle things with me recently, but I have a hard rule on no cheating. Plus, if that’s going to be her reaction whenever things aren’t going great, why would I want to spend my life with her?” — Will, 27

7. “This is one that I still have trouble wrapping my head around. I was dating this girl who I had known for a while in my circle of friends, and she had recently broken up with a guy who I also knew from this same group. Things seemed good. I even ran into this guy at a party and we talked a bit and he basically gave us his blessing. And then about three months into our relationship I find out from his best friend (who was also my friend) that they’d basically still been hooking up since they broke up. I asked her about it and ended things. I just don’t get what the hell either of them were thinking. I still don’t. If you want to break up and hook up, fine. But why see other people and lie to them about it? ” — Sam, 28

8. “My ex kept texting a ‘coworker’ named Jen. She’d get messages sometimes at weird times of the night or while we were out on the weekends, but her whole thing was just that her and Jen were really close at work and Jen was going through some rough times. She even took a phone call from ‘Jen’ once when we were out on a date because she had apparently gotten hospitalized. Then one night, we’re in bed together and she’s asleep, and her phone goes off. I look at it, and ‘Jen’ texted her something to the effect of ‘I want to fuck you so bad.’ It turns out she had this dude saved in her phone as Jen and made up the whole backstory so she’d have an excuse if she ever got messages while we were out. I woke her up, and she tried to deny it for some reason, even though she’d been caught red-handed and I’d seen enough of the conversation history to basically piece this all together on my own. That ended that.” — Brandon, 28

9. “So early on when we started dating, she had cheated on me. It became this huge argument, and she felt like we weren’t officially a couple at the time so she didn’t realize it, but now she knew she loved me and cared for me and all this stuff. I had found out about it a few weeks after it had happened and she swore up and down it was just a stupid mistake. She didn’t tell me since she felt like she didn’t technically do anything wrong at the time. A month later, I went to meet her at a restaurant. My table had a pretty good view of the street, and I saw her get dropped off by this guy. To clarify, I knew who he was because he was a friend of a friend of a friend type-deal, not a total stranger. At that point I knew she was manipulating me. What I did next probably wasn’t the most mature response, but I don’t really care. It pissed me off that she would literally get dropped off by this dude she was clearly hooking up with right before she came to see me. I acted like everything was fine, which was tough. I ordered a bunch of expensive stuff, had dinner, and then ‘went to the bathroom’ but really I just left. She texted me incredibly angrily until I said ‘I know everything.’ She didn’t respond after that.” — Joe, 29