And the bride wore a rental gown: Is hiring clothes the future of fashion? 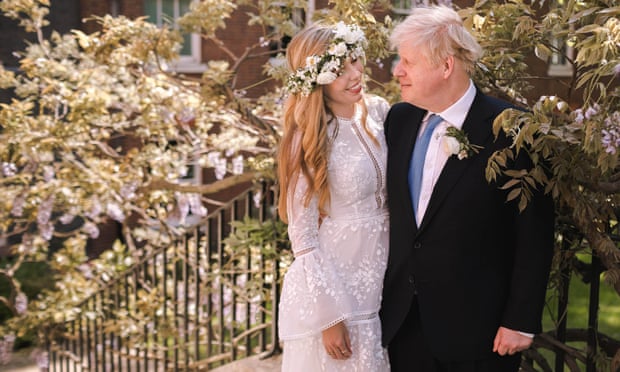 When Carrie Symonds married Boris Johnson over the bank holiday weekend, it wasnâ€™t in a dress handed down by a relative, or a custom-made designer frock destined to take up space in her wardrobe for years to come. It was in a dress she had rented for a few days from a website called My Wardrobe HQ.

You might not expect a person who spends tens of thousands redecorating a flat that she will only temporarily live in to be much of an economiser, but it turns out that Symonds â€“ now Johnson â€“ is a frequent renter. â€œCarrie has always rented from us,â€ says Sacha Newall, the founder of My Wardrobe HQ, who had no idea that this particular dress was destined for Westminster Cathedral. â€œAs a regular customer, nothing flagged as being unusual about the order.â€

The embroidered tulle gown, the work of the Greek luxury designer Christos Costarellos, reportedly set Symonds back Â£45, whereas it would have cost Â£2,870 to buy â€“ about Â£1,500 more than the average wedding dress in the UK in 2019.

Renting clothes â€“ everything from dresses and shoes to bags and hairbands â€“ has become increasingly popular over the past few years. With about Â£140m worth of used clothing being sent to landfill in the UK every year, according to the charity Wrap, it is seen as a relatively guilt-free way to partake in fashion.

Even the pandemic didnâ€™t make a dent. â€œIâ€™m very surprised that we did have rentals,â€ says Eshita Kabra-Davies, the founder of By Rotation, which is part social network and part rental platform and has more than 60,000 users. â€œIt would be for things like celebrating birthdays with partners or housemates â€“ that dopamine dressing thing.â€

After about a month of lockdown easing, the market is even more buoyant. By Rotationâ€™s revenues are already up about eightfold on the start of this year and it is a similar picture at My Wardrobe HQ. â€œIt does feel like the momentâ€™s now,â€ says Newall.

With many people looking to re-enter beer gardens with a bang, there is much speculation that we are in for a summer of statement dressing. If 2020 was a year to forget, Newall believes that 2021 will be a year to remember: â€œFashion rental has dovetailed really nicely into that. As part of that memory, you want to wear something incredible â€“ but how many times do you want to wear it?â€

It hasnâ€™t hurt the rental market that, during lockdown, people were finding time to sort through their wardrobes and get to grips with what they did and didnâ€™t need. Also, with charity shops closed for much of the year, they were forced to explore other outlets for their unworn garments. â€œAll these spring-cleaning Marie Kondo conversations that people were having were very beneficial for a peer-to-peer marketplace like ours,â€ says Kabra-Davies.

But what of the practicalities? While different companies operate differently â€“ private lenders and renters with By Rotation clean items themselves before posting them to one another, while My Wardrobe HQ takes care of cleaning and couriering â€“ it is not always as faff-free as some might want.

Caryn Franklin, fashion commentator and activist, doesnâ€™t believe this will hold people back, though. â€œHumans are amazing adapters. I was someone who, really early on, questioned whether selling clothes online at all would work â€¦ Iâ€™ve already been proved completely wrong,â€ she says. â€œWe already have a culture of sending stuff back â€“ people order far more than theyâ€™re going to keep so they can do a trying-on session.â€

So, is renting the future for fashion? â€œAbsolutely,â€ says Newall, quoting research for the US firm Rent the Runway that 20% of the retail market will be rental by 2025.

Franklin believes it is one of many creative solutions being offered to fashionâ€™s sustainability problem â€“ and wonâ€™t be right for everyone. â€œWe need a variety of solutions,â€ she says. â€œI think that we still will choose to make relationships with items of clothing that are ours and ours for ever â€¦ weâ€™ll also have a movable feast within our wardrobe, which we will switch.â€ There are, after all, â€œlots of garments that weâ€™d all like to have a go on â€“ so why not rent?â€