From housework to sex, here's how relationship contracts can help couples 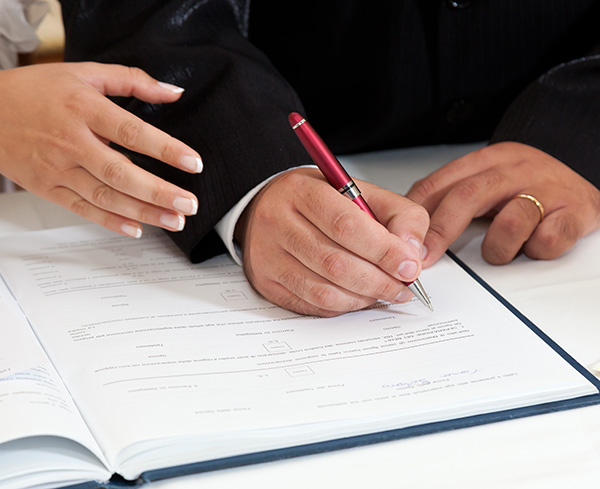 So often, our language around romantic love makes it feel like it's out to get us: we're captive passengers on a high-speed train to an unknown destination; jolly patients of the same contagious, all-consuming malady; victims of some inescapable, omnipotent force.

But love today should be an active choice â€” something you grow and build together with a partner, instead of something that just happens to you. At least, that's what writerÂ Mandy Len CatronÂ found when she started researching the subject for her book,Â How To Fall in Love With Anyone.

Catron is also the author of the highly-circulated and much-celebratedÂ New York TimesÂ piece,Â "The 36 Questions That Lead to Love,"Â as well it's slightly more maligned little brother, "To Fall In Love, Sign On The Dotted Line."

While the former gives readers' a shiny key to potentially unlock their own happily ever after, the latter offers an ultra-practical â€” albeit seemingly unromantic â€” solution for love maintenance: relationship contracts.

"I think people have this idea that you're going to print it out and be like, 'You said that you were doing the laundry this week!' " says Catron, but that's largely missing the point.

"Every relationship is contractual, we're just making the terms more explicit," she says.

Despite its legal-sounding moniker, a relationship contract isn't a binding agreement. Rather, it's a tool for couples to express their needs and work together to craft the parameters of their own unique relationship roadmap: including anything and everything from health and housework, to sex and intimacy.

"If you instead reframe it as an agreement or goal-setting," stresses Catron, "then it's really just a way of saying ...'I'm invested in this relationship and this person. Therefore, I'm going to do my best to do it.' "

The power of this exercise, says Catron, is that it steers couples away from those problematic, passive notions of romance and toward agency and thoughtfulness in our love lives.

Read on for tips and takeaways for creating a relationship contract from our interview with Catron, or listen to the full episode at the top of the page.

Get a handle on your expectations

Â
Thanks to a host of societal influences, sociologists and psychologists have found thatÂ our expectations for our romantic partners are higher now than ever before.

That's an incredibly tall order! But so is deprogramming that thinking, she says.

One way to correct for this heavy burden is "to distribute the load a little more evenly," says Catron. That might mean turning to friends instead of just your partner for emotional support, or including other family members in child rearing duties when you've got too much on your plate.

Set parameters that work for you

Nothing should be off-limits, says Catron. You and your partner can decide what should be addressed and how often to revisit your contract.

Catron says think both big and small: from how you expect day-to-day life to go as well as bigger questions like how you define intimacy, or your personal and professional goals.

It's OK to be idealistic in some areas (Do you want to contribute more to the local community? Achieve financial freedom together?), and hyper-practical in others (Is the housework distributed evenly? Who's responsible for taking out the trash on Tuesdays?)

Catron and her partner started with a six-month contract inspired by the bookÂ The New I Do: Reshaping Marriage for Skeptics, Realists and Rebels, and they now revisit it once a year.

Write it all down

It's important to take the time to put your thoughts and feelings onto paper because it allows you to come back to it, says Catron.

"I think there's really something to be said for six months later, 12 months later, however you want to do it, checking in to see if you have the same goals, if your needs have changed, because inevitably they have," she says.

A contract also provides a "built-in occasion" to sit down with your partner and talk about what is and isn't working, without having to feel "like you're being nitpicky or you're nagging." It's a space for discussion and negotiation, as well as creativity.

Once you start drafting your contract, don't be scared to think outside the box. Catron and her partner, for example, have a section dedicated to leisure, complete with a game plan for monthly dates, and a written understanding that they both need and deserve alone time.

Just taking the time to verbalize and memorialize those small points of need can help remove guesswork and friction out of your relationship.

It's about agency, not perfection

A relationship contract isn't going to solve all your problems. "There's not always going to be a perfect middle ground" for every topic on your list, and you'll probably find some areas more uncomfortable to talk about than others.

Sex and finances, for example, are common sticking points for many, says Catron. But the beauty of a relationship contract is that it provides a safe space for you to voice hard-to-discuss wants or fears that might otherwise just go assumed, unsaid or unresolved. There's a lot of power in that.

Being open and honest with your partner isn't always easy, but the result, hopefully, is a stronger couple made up of individuals that are better seen and heard by one another â€” that was Catron's experience.

"It really made me feel like a co-creator in this process, as opposed to someone who is just sort of sitting back and letting the relationship go wherever it's going to go and hoping for the best," she says.