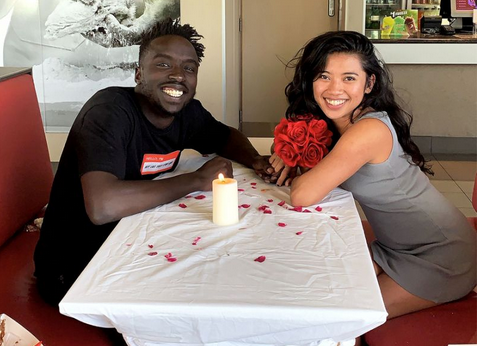 A romantic boyfriend took his partner’s love of fried chicken to the next level by surprising her with a fancy three-course dinner date at KFC, complete with candles, rose petals and table service.

The best things in life cost less. This famous expression was brought to life when a romantic boyfriend took his girlfriend to a romantic dinner date at KFC for $15.

His girlfriend Diane Del, 26, thought they were simply going to visit Emmanuel’s cousin who was supposedly in KFC at the time.

With a tablecloth elegantly draped over a booth table, decorated with rose petals and illuminated with candles, the loved-up pair were treated to a delicious three course KFC dinner, which was even bought to them by ‘waiters’ on cardboard plates.

“It was just something that popped into my head on the day,” Mr Kei said. 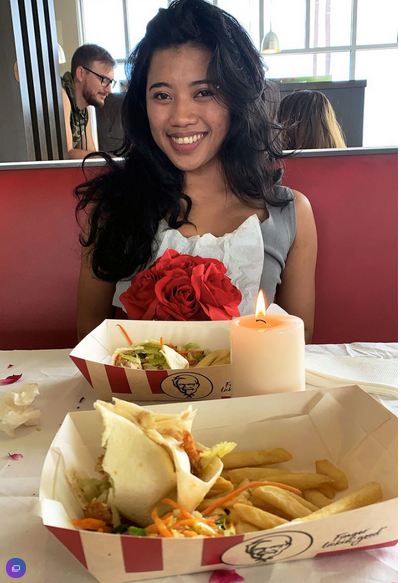 “I was really hungry, and just thought why not do a romantic dinner in KFC.”
The elegant dinner included an entree of chicken nuggets and chips, a main of a Twister wrap with salad, and then a decadent dessert of chocolate mousse with icing sugar and topped with sweets that Mr Kei brought with him.

Despite the romantic date costing far less than a traditional dinner out, Mr Kei said that both him and Diane agree it was the best date that they had ever been on.

“I went to the KFC about an hour before I was going to pick up Diane. I spoke to the manager there and he was really supportive of the idea,” Mr Kei said.

“I decorated one of their tables with a nice table tablecloth, some rose petals and candles that I’d bought, and also gave her a bunch of flowers.”

“Diane was so excited and happy when she saw what I’d done. It was so lovely to see her like that.
“The reaction of other customers inside the store was funny. One lady told me that I should write a book about romance and send it to men around the world.”

The couple also uploaded a snap of their romantic dinner to the KFC Australia Facebook page where it has since gone viral, racking up over 11,000 likes and 6,000 comments in a matter of days.

“I just wanted to do something to make her smile. She is not the type to want expensive fancy dinners and would much prefer something like this,” Mr Kei said.

“It goes to show you don’t have to spend a lot to make someone happy. It was the thought and effort that I put in that meant a lot to her.

“It was the best date we’ve ever been on and the best part it only cost $15. To me it was better than getting lobster for dinner.”