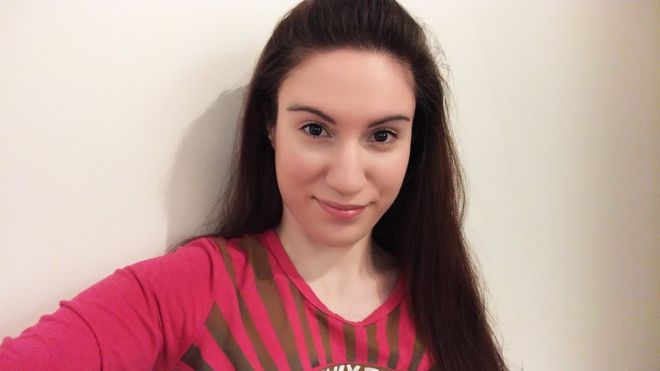 When we first saw the doctor, my father put on a brave face. My mother, on the other hand, didn't take it so well. She blamed herself for the past 10 years. It was really heartbreaking to see her like that.

We didn't talk about it much for the first five years. I wasn't able to talk about it. I felt destroyed and incredibly weak. My mother believes she may have done something wrong in her pregnancy. I've explained to her that she didn't do anything wrong, it was just genes.

It's a condition that is stigmatised. The most hurtful thing was when I was abandoned after my former partner found out.

I was engaged when I was 21, living in Athens. When I told my fiance about the condition, he broke off the engagement. That all belongs in the past and I am OK now. For the past five years, fortunately, I have had a stable and loving relationship. He knew from the beginning that I have this condition and he chose to stay with me. He knows that maybe the future will be without children. He's OK with it. I'm also OK with that. I am one of the luckiest.

My mother took me to our family doctor when I was 14 because I still wasn't menstruating. He didn't examine me because he wouldn't touch my private parts and when I became 16 he sent me to a hospital to be checked out. They realised that I didn't have a vaginal tunnel and I had Rokitansky syndrome. Because I was born without a functional vagina, the doctors had to make one in order for me to have sex.

It went well, really well. I stayed in a hospital for about two weeks, in order to recover. Then I had to be about three months laying on a bed - I couldn't get up. I did vaginal exercises in order to expand my new vaginal tunnel. The first sign of it is you have primal amenorrhea - you don't havte any menstruation at all. Apart from that, you cannot have sexual intercourse. That's why I had major surgery aged 17. The doctors made me a new one. It was a revolutionary procedure in Athens.

The new vagina the doctors made was narrow and small, and it caused me a lot of pain while having sex, and I had to expand the perineum by doing vaginal exercises. It's a small area underneath the vagina. It's skin, it's tissue, and they had to cut it more in order to expand the entrance, as I call it.

After that I was OK physically, but I was not OK emotionally. It's a burden, like something that you cannot get rid of it. I had partners who emotionally abused me about this condition. I couldn't have a stable relationship for many years because of that. It is a haunting and unbearable situation. It steals your happiness, your mentality, your chances of having a good and stable relationship. It leaves you with a huge void that cannot be filled, it fills you with anger, guilt, and shame.

Apart from that, it was hard afterwards. It was just taking a toll on me emotionally, psychologically - it was really, really hard.

Well, it's been almost 10 years. I'm still feeling bad about it but I'm not ashamed any more, it's been way too long. And I've realised that I cannot change it, it's just the way it is, I have to embrace it and live with it.

For the first few years, and still sometimes, I thought I was worthless. Damaged goods. Not worthy of being loved. I was a lost soul for many years. It can destroy your life. It puts you in a really hard position. I battled depression, anxiety, panic attacks, you name it.

It taught me a lesson. Although I don't believe in God, I do believe that this was a huge wake-up call - never take anything for granted.

I was reborn. It gave me a new life, a new identity. It changed the course of my life. Before, I was a typical teenager with ups and downs. Afterwards, I became really, really mature. I grew up rapidly. I am thankful for that.

This defined me as a person. I am living each day as it is. I am not making any future plans because I don't know if I'm going to be alive.

Not many people know this about me. I wanted to keep it ar secret and my mum told family members. It wasn't the best experience because people pity you. I don't want people to feel sorry for me. I'm not dying, I'm not in danger. People had this pitiful look. It made me feel sadder about myself.

I couldn't talk about it because in Athens - in Greece generally - people are really close-minded. Sometimes it felt like I was living in the Middle Ages.

I would love to be a mother in some way, be it a biological, a surrogate mother or a foster mum. A mother is not the one who gives birth but is the woman who cares for a child.

At this stage of my life, I'm not thinking about it but maybe in the future I will have children. I love kids, we will see.

It is liberating to talk about it. I want to support every woman that has this condition because I have been through hell and I know what problems this can cause. Many women have committed suicide because of this. It can be really depressing.

I found the strength and courage because I want to help other women in the same position because if we don't help each other then who will? It gives me strength when I talk about it.