Meet Martin Fodor: The man who swam across Lake Bosumtwi 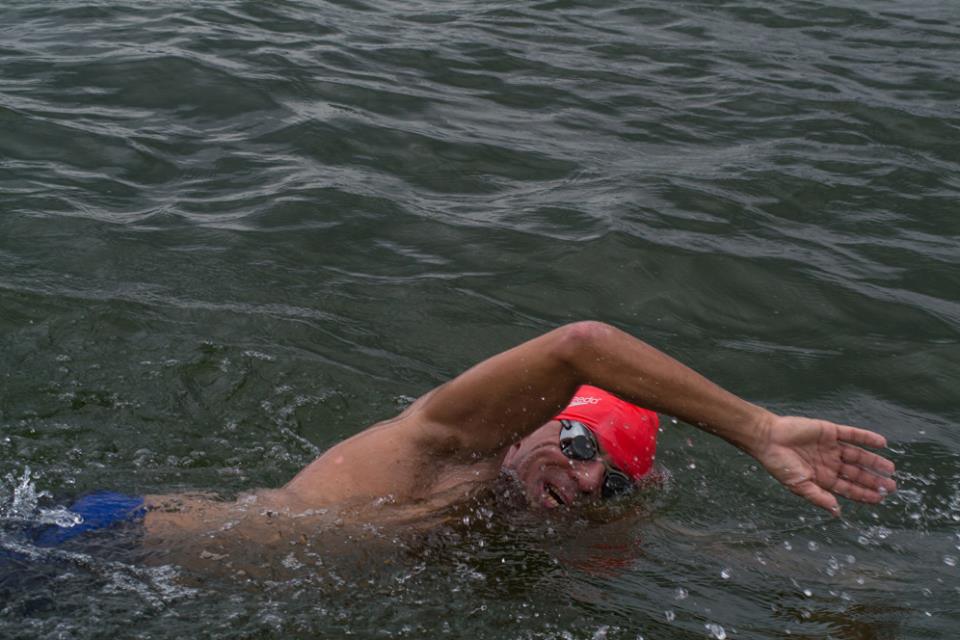 These are exciting days for tourism. And I am particularly thrilled because I have just discovered a young man, with huge potential for travel- writing. But there is another hero- Martin Fodor. Martin was in town with a plan to conquer Bosumtwi.

Swimming across Lake Bosumtwi is like swimming from Madina to Tema Station, Accra. I couldn’t go along with him as he had wished. I got him Allen Anewu, a young student journalist of Central University. There is hope for Ghana. Enjoy this young chap’s brilliant write-up.

When I read Kofi Akpabli’s post on Facebook that Martin was going to swim across Lake Bosomtwe, I thought to myself, this will be interesting. So when Kofi said Martin wanted someone to accompany him, I gladly opted to, because I knew it would be a once in a lifetime experience plus I will never turn down an opportunity to visit a tourist site.

I thought Martin was going to be a 32 year old man who travels the world and does crazy stuffs, but I was wrong. Martin Fodor is a 47 years old Slovák who works for the World Bank as a Senior Environmental Specialist. I wondered, why an environmental expert would want to swim 8.4 kilometers across a lake– so I asked him.

“It’s a beautiful thing.How many times do you get to swim a crater lake?”

Lake Bosomtwe is a natural lake located south-east of Kumasi and was formed by a meteorite strike over a million years ago–so swimming or taking a boat ride on it is like riding in a big bath basin just that this time, you are surrounded by mountains and hills. The lake is surrounded by many villages too, with very welcoming people and beautiful resorts.

This wasn’t the first time Martin was going to perform an extreme act as he has already ridden a motorbike across the country from Greater Accra through Volta, the three Northern Regions, Western Region, through Ashanti, Eastern region then back to Accra. Also, he hadonce taken a bath in a volcano crater lake in Uganda.

Though Martin’s swim across the lake was for personal fulfillment and to promote tourism, he tried to do it as professionally as possible. He adhered to the rules of marathon swimming from standard equipment to swim rules. I guess the perfectionist in him won’t allow for a haphazard job.

The lake itself is seen as very sacred to the communities surrounding it. It is forbidden to touch the water with metal. The traditional boat here is a large plank of wood (pedua) but now people compromise and allow tourists to take a ride on the lake in the motorboat we used as an escort boat.

We arrived at Ankaase–one of the 21 communities around the shores on Saturday, 25th June at about 8:20 am. Martin then warmed up and at 8:30 he walked into the lake to swim to Abonu. He made two stops, one to have water and the other to have an energy gel– he did this without touching the escort boat or any of us in it.

After 3 hours 17 seconds, Martin was on the shores of Abonu and walked out of the lake to a hero’s welcome from the locals in front of Destiny Bar— a bar owned by Sammy, “the escort boat guy.” This was the first time anyone could attest to such a swimming spectacle though there is a myth of ‘’a certain white lady” who had completed the course in 4 hours 30 minutes.

Martin staggered out of the lake but after feeding off the energy from his cheer leaders, he spent the next hour interacting and taking pictures with locals and some foreign tourists. People marveled at the amount of energy Martin exhibited after a 3 hour swim along an 8.4 km route. A woman asked him how he did:

“I moved my legs and hands. But you have to move them properly”

Martin Fodor clearly has tourism at heart and that has been a source of inspiration for this performance which will definitely book a place for him in the tourism history books- the first person on record to swim across the magnificent Lake Bosomtwe in a record time of 3 hours 17 seconds.

I enjoyed every minute I spent in Abonu; the serene atmosphere overlooking the lake and its surrounding landscape. Martin said that people will now have a reason to visit the lake as they have a record to beat.