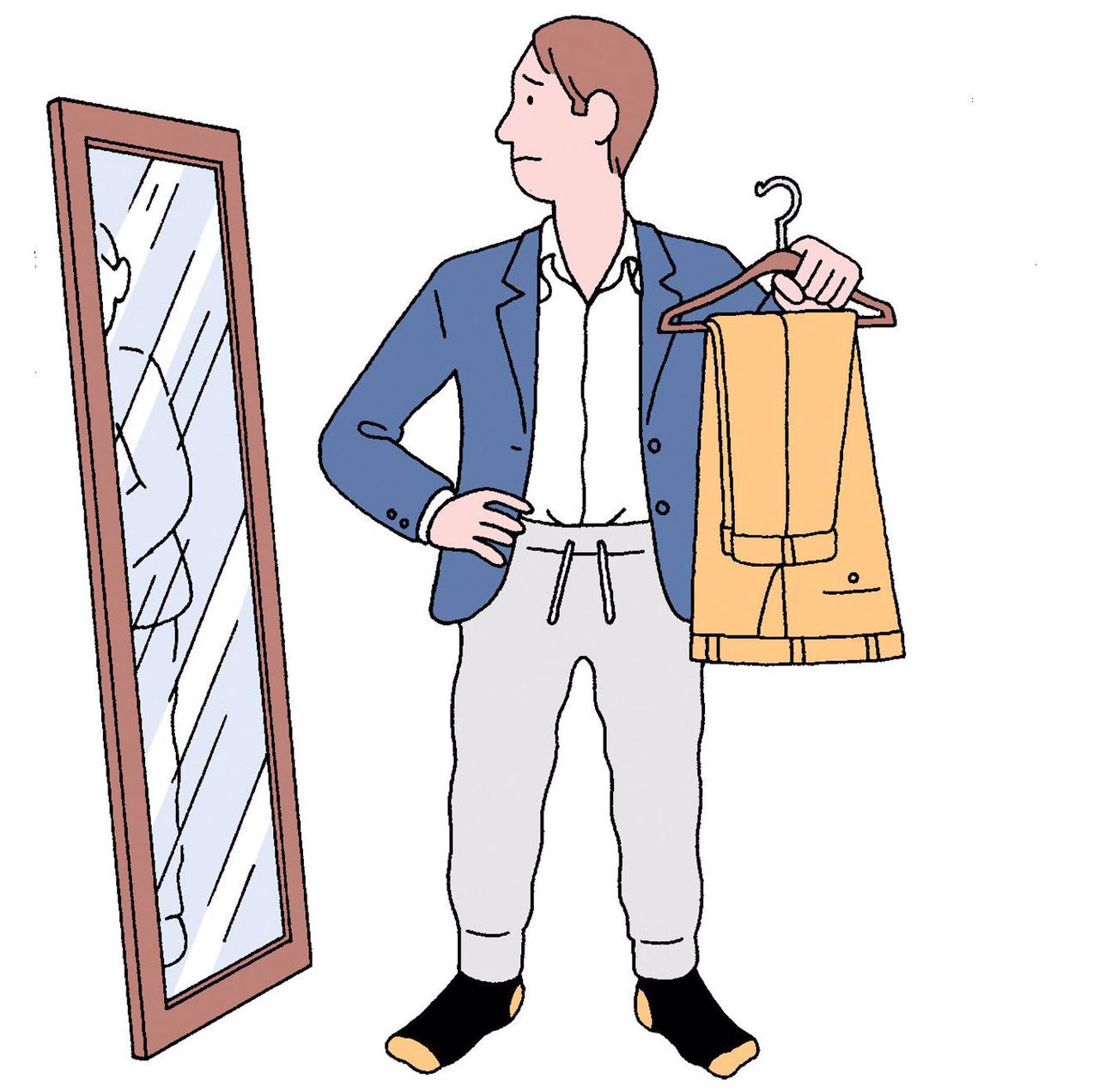 AFTER NEARLY two years of working from home, many men are saying goodbye to daytime pajama bottoms and returning to the office. This is a tricky proposition.

The rules governing workplace attire were already relaxing pre-Covid; throw in two years of Zoom calls and a universal acclimation to comfy outfits, and the once-standard “business casual” dress-code has become problematically hazy.

One clear consensus: More than ever, we’re allowed to dress for our days. No in-person meetings on Tuesday? Your garb can be more relaxed than it could pre-pandemic. But if you’re seeing clients on Wednesday, you’ll want to match their vibe—which could mean dressing up or down. “You have to gauge the occasion,” said Robert Dahdah, 54, the chief revenue officer at a Boston software technology firm. “Some days, a tie is not the right thing to wear.”

This “choose your own adventure” situation can generate a fair bit of head-scratching, so we’re stepping in to answer five questions about appropriate business-casual attire in 2022.

1. Let’s talk pants. How casual is too casual for business casual? Can I wear sweats or jeans? 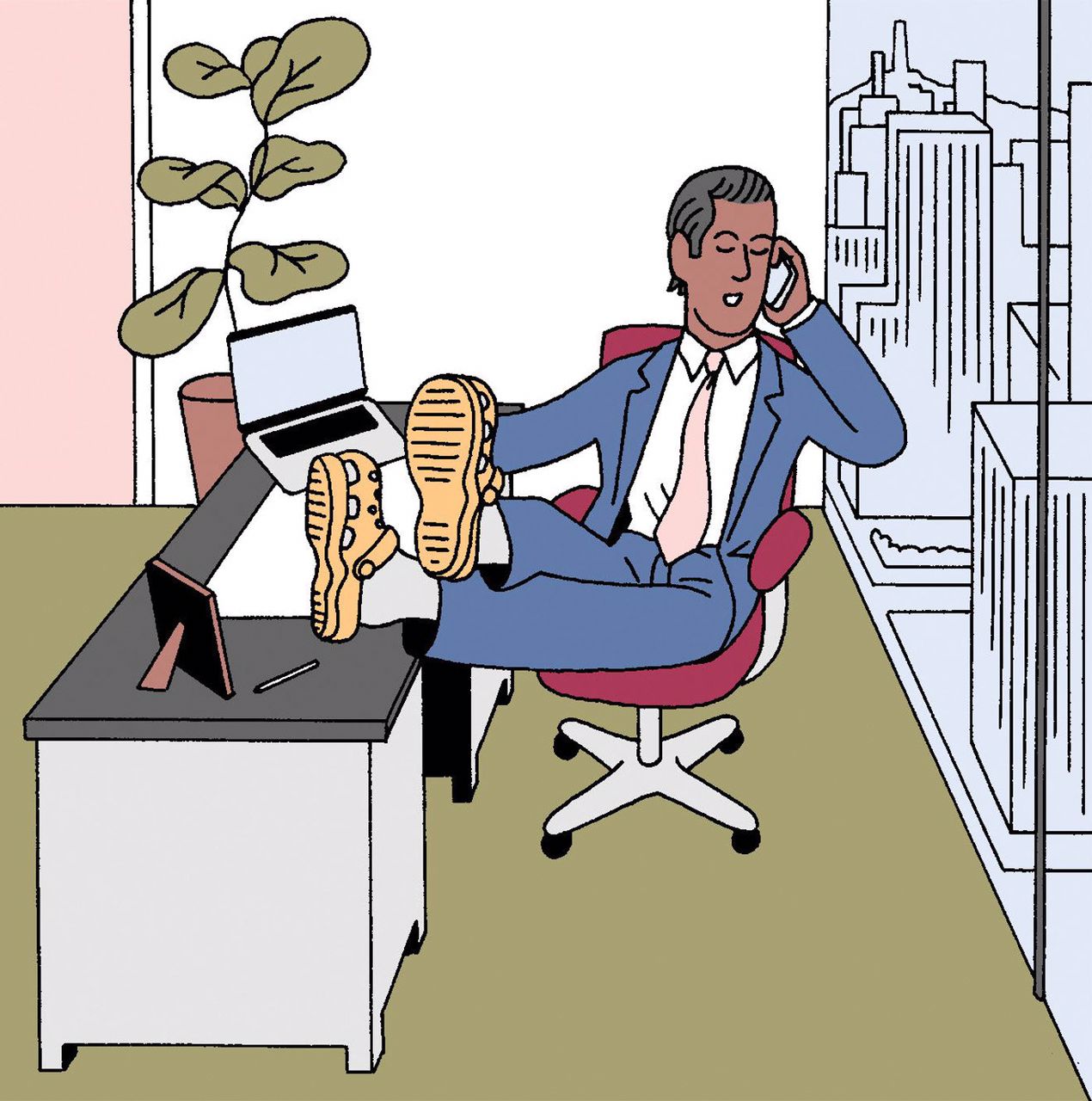 You already know this: The office is no place for sweatpants. But don’t start sighing. “Easy pants” are here. These indulge us with drawstrings or elastic waists but otherwise pass as regular pants.

At his e-store No Man Walks Alone, Greg Lellouche sells sharp styles from brands like Japan’s Fujito that, he said, “won’t raise eyebrows” in the office. Dan Riley, who works in economic development in Bloomfield Hills, Mich., has eased back into office life in a tailored brown-corduroy version by Japan’s Camoshita. Mr. Riley, 43, values their comfort but conceals the stretchy waistband with a sweater lest anyone see he’s forgone a belt. Other style notes: Five-pocket pants are a slightly slouchier alternative to staid chinos, and denim is “totally acceptable in the office now,” said Mr. Dahdah. But, he cautioned, choose well-fitting, dark, unravaged jeans. Rips remain taboo.

2. I’ve worn comfy Crocs every day while WFH. They’re basically part of me. Are they OK for the office? 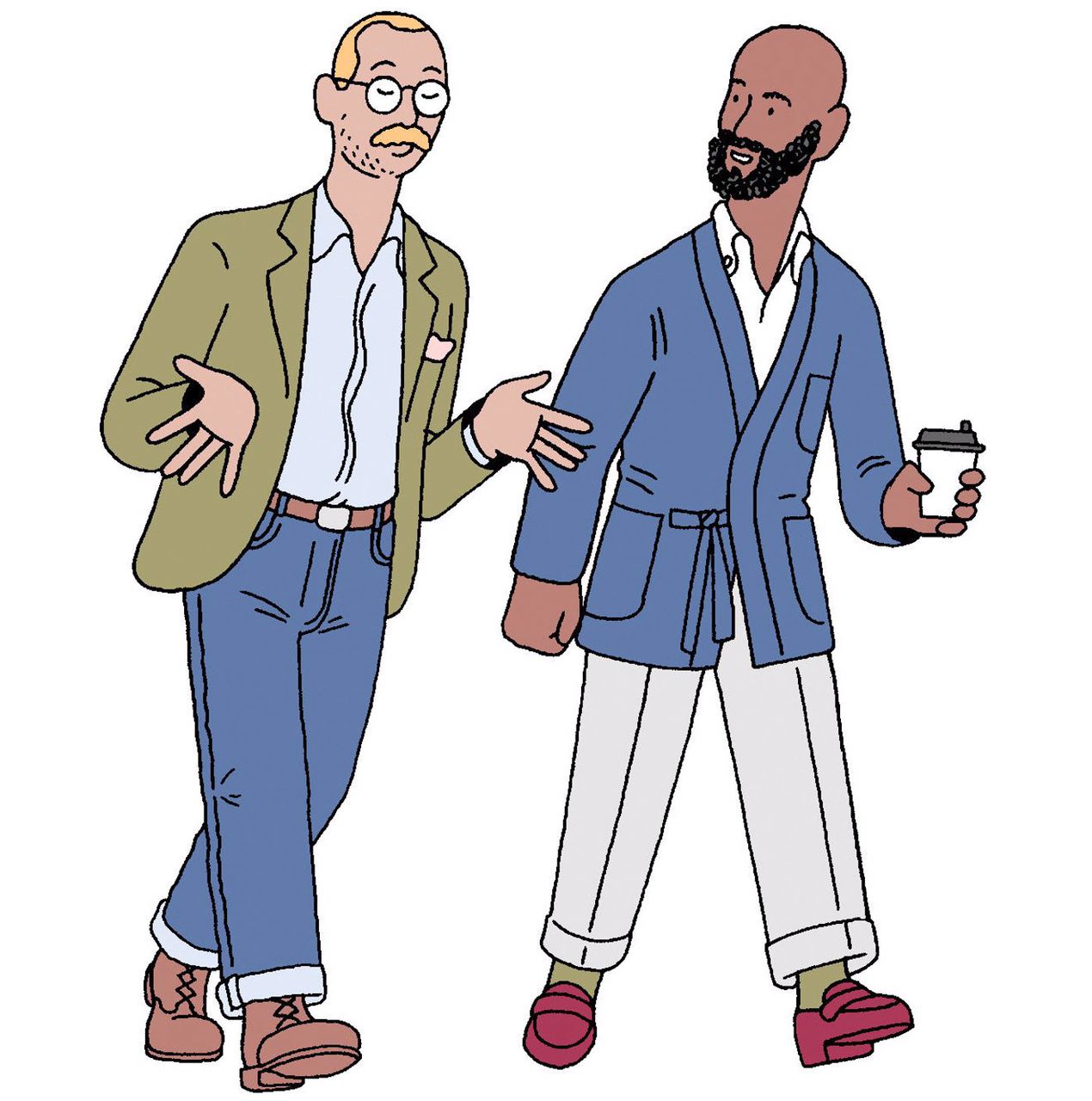 Are you a surgeon or chef? Crocs are a hard no in almost all other professional contexts. Fortunately, fashion now offers many unstuffy alternatives to stiff Oxfords. Sneakers can work well; Mark Cho, co-founder of the Armoury, a men’s tailor with stores in New York and Hong Kong, likes the quiet designs from Sweden’s CQP, whose uppers are a similar—if not the same—shade as the soles, whether white, gray or navy, “so it doesn’t feel like you’re wearing Air Jordans to work.” If you’ve lost the will to tie laces, fear not. Loafers are hot. The Armoury makes models with oiled-leather soles that are extra soft and flexible, while Mr. Lellouche recommends Brooklyn brand Blackstock & Weber. Stacked on a thick lug sole, its loafers (in horsebit, penny and tassel styles) are “more like a Range Rover than a Jaguar,” he said. Whatever shoe you choose, chunky soles feel current because they match “the step down in formality,” he added.

3. Do I need to pull my sport coats out of storage? 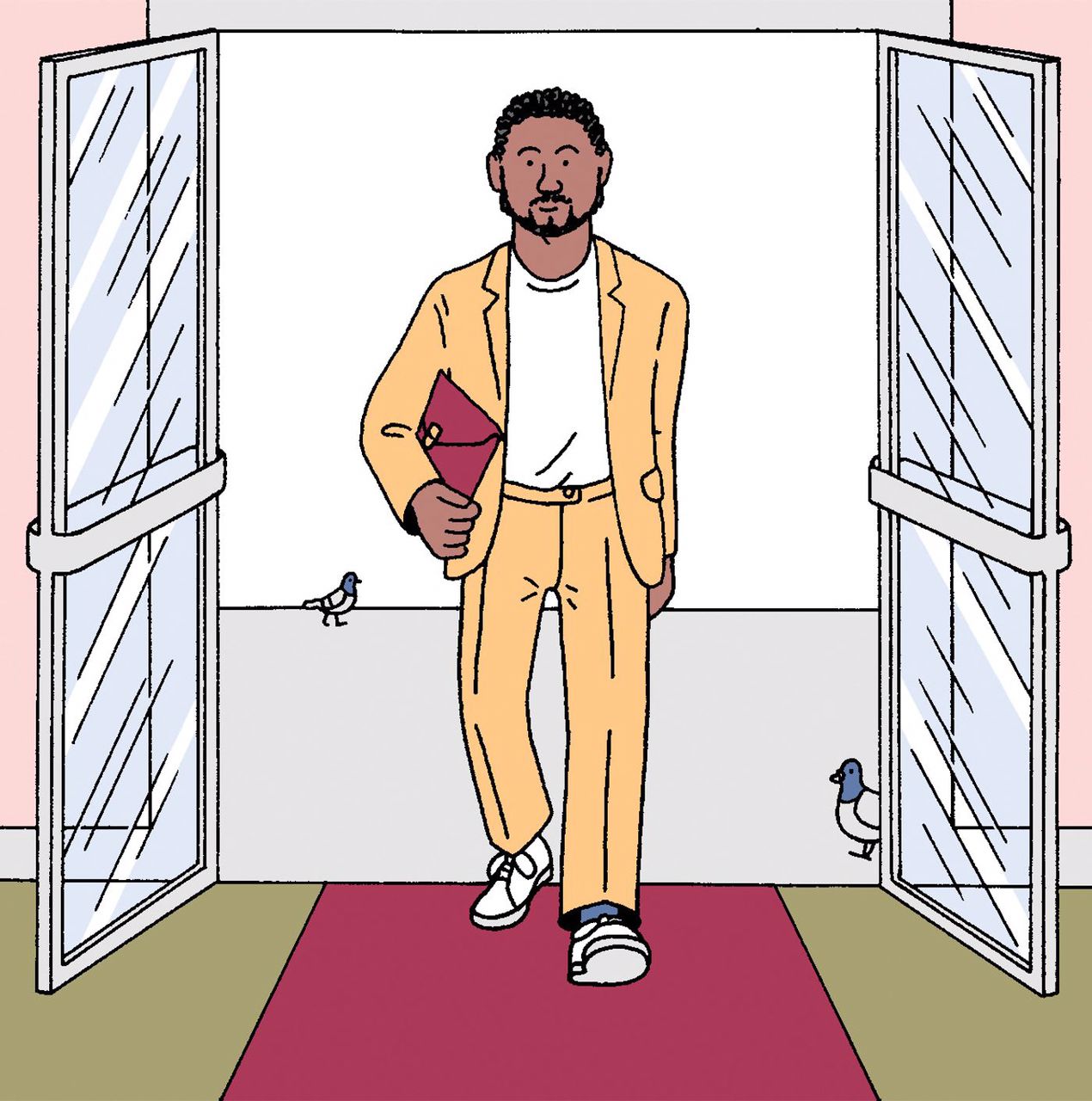 Despite the advent of easy pants, some evidence suggests men are newly smitten with sport coats. The Armoury is selling more sport coats “than ever,” said Mr. Cho. His clients, many of whom work in the corporate, art and tech worlds, are trying nonstandard shades such as pale blue, burgundy and olive; textured brown styles, too, are “having a moment.”

Other folks are pushing the envelope on what an office-appropriate outer layer can be. Michael Ollinger, 37, who works in commercial real estate in Washington, D.C., has swapped his sport coat for a Valstar bomber jacket, while Mr. Riley favors an industrial-orange L.L. Bean x Todd Snyder wool overshirt, even if “it looks like I should be out hunting deer,” he said. Ravi Khanna, 36, who leads brand marketing for a fintech startup in New York, has embraced the kimono. He rotates four denim versions from brands including Universal Works and Snow Peak. He considers a kimono—which ties, not buttons, closed—a fun way to combine a “laid-back feeling with some of the structure of a sport coat.”

4. Are suits too stuffy for the workplace now? 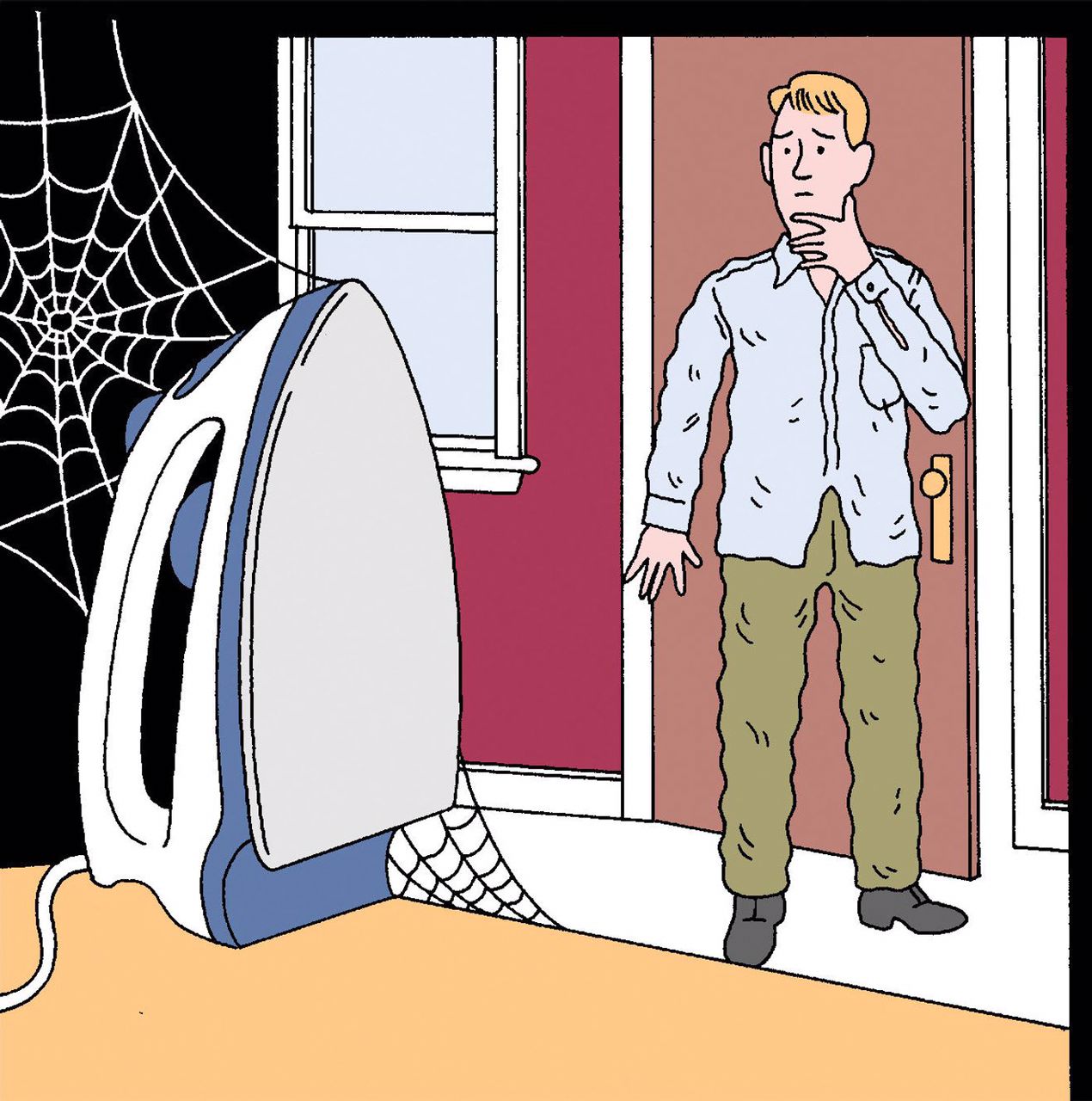 If you want to signal that you consider a meeting important, few outfits rival a razor-sharp suit. Mr. Cho said that his C-suite clients are still buying new suits for board meetings. Nonetheless, the ranks of men suiting up daily is clearly lower now than pre-pandemic, said Mr. Dahdah. He used to be a suit-and-tie-every-day type of guy; now there’s “more flex” in his wardrobe.

Another benefit of suits? They eliminate the tricky task of assembling a coordinating outfit. But so do the new casual sets Mr. Lellouche sells, such as a chore coat with matching pants from Paris’s De Bonne Facture. If you prefer separates, adopt a no-brainer, tone-on-tone styling strategy: “If you have a bunch of brown sport coats, get a bunch of beige chinos,” advised Mr. Cho. Reluctant to retire your two-piece? Try dressing it down by pairing it with a T-shirt and smart sneakers instead of a button-down and shiny shoes.

5. Wait…do I have to start ironing again?

Not if you follow Mr. Riley’s lead. He’s handy with an iron thanks to his time in the Marine Corps, but he hasn’t picked one up in the last two years and plans to avoid pressing issues going forward. He sports Oxford-cloth button-downs, wide-wale J. Press cords and sturdy, military-style chinos from RRL that “look fine without a crease.” Mr. Lellouche, meanwhile, has noticed more customers swapping dress shirts for knitted polos or merino-wool crew necks that bring a “softness” to ensembles. Men can “wear the same knit multiple times and just fold it and put it back on the shelf,” he said. “They don’t have to constantly have it cleaned and pressed.”