John Kufuor is behind NPP’s return 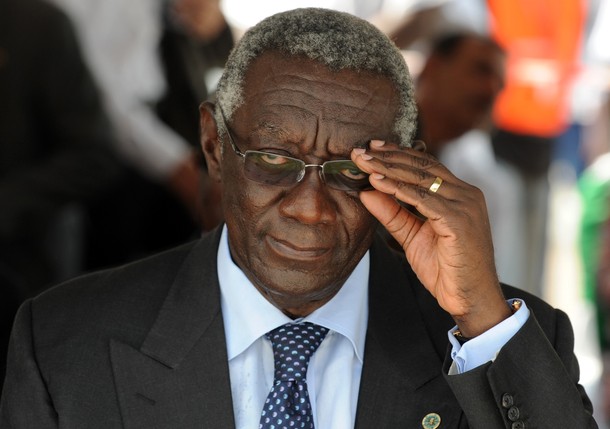 To the global community Ghana has chalked another success in its democratic journey by effecting a change of government through the ballot box rather than through its previous regular resort to the barrel of the gun.

In the country however many pundits ascribe the victory of the opposition leader, Nana Akufo-Addo to the appeal of his message to the people which inspired them to shift their preference towards him.

Of course, there are curious occurrences during the ballot collation process which over time will become apparent to the observing public. Issues such as hacking and software manipulation, ballot box stuffing, deliberate transposition errors during ballot accounting by agents of the opposition along the Electoral value chain remain live on the tongues of many in these period following the elections.

An evidence of software manipulation has been circulating on social media in which the results from the Afadjato South Constituency in the Volta Region, for example, where the ruling party wins overwhelmingly show a swap of the figures in favour of the opposition candidate.

But the greatest ‘invisible hand’ in the decision of Ghanaians to vote for the opposition’s Akufo-Addo is not only that his message appealed as much as to earn him the Presidency, but that of former President John Agyekum Kufuor. For, if the observers and followers of the New Patriotic Party wish to understand the source of this electoral victory they must look back at a single decision President Kufuor took as President of the Republic of Ghana in 2008.

In this year’s campaign Ghanaians have repeated one issue persistently which they wanted the government to pay attention to. Even the deaf would have heard it loudly. It was the issue of economic hardship.

Everywhere I went to in the country teachers, mechanics, bankers, fishermen and even government appointees pointed to this singular thing they reel under. Often they would acknowledge the unmatched performance of President Mahama in the delivery of critical infrastructure in all sectors. Yet they return to this one burning issue of how money in their pockets could not go far.

But of course this situation is not without cause. On 6th of January 2009, the evening of the departure of former President John Agyekum Kufuor from office as President of the country he announced salary increases ranging from 16.5% to 34% with effect from 1st January of that year. This part of his signing into law the Single Spine Salary Implementation which tied the hand of the Mills government and pitched it against organised labour.

The new government had no option but to pay, though is much later. This singular decision threw the whole economy out of gear. As a result, at a point 70% of government revenues was spent on salaries and emoluments. This meant that other expenditures could not be met except through borrowing. But more borrowing meant that more interest payments were building up. Interest rates were also building up while inflation was eating up purchasing power. The government under John Mahama needed to take drastic steps to resolve the menacing decline the high expenditure triggered.

This is why in early 2015 the Mahama government went into a three year IMF programme which bailed out the economy with US$918 million. It was to rein in government spending, reverse the spiraling rate of budget deficit and to restore debt sustainability. This would also ensure macroeconomic stability in the country and eventually foster a return to high growth, job creation and protect social spending.

A group of high powered economic management experts met in Akosombo to build a national consensus around solving the severe threat faced by the future of the country at this invisible hand of President Kufuor. They agreed a road map called ‘the home grown policy’ which was then approved by the IMF leading to the bail out.

Through all these President Mahama had not missed any opportunity to inform Ghanaians about the severity of the problem. On 21st February, 2013 he vividly portrayed to the country the severity of the levels of salaries and emoluments as expenditure items on the national budget. He was emphatic that “the meat is now down to the bones.”

But he was also clear that this programme with the IMF was not going to be a walk in the park. Sacrifices would have to be made by everybody. However as the harsh adjustments resulting from the programme kicked in Ghanaians wailed and whinged in protest as Dr Bawumia, like an Orchestra Conductor, made deafening presentations blaming incompetence of the government for the hardships.

The natural consequence of this build up was a disillusioned voting public against the ruling government.

Mothers complained about school fees they could not afford. Students protested against allowance cuts. Taxi drivers condemned the cost of plying their trade. The attention of none was drawn to how the country arrived at this point. Worse, the New Patriotic Party blamed it on cases of corruption even though no link exists. Not only that, government’s communications machinery took no concerted steps to delink corruption on one hand and properly establish Kufuor’s decision as the genesis and source.

Should the NPP be grateful to President Kufuor for creating the condition which led to their party’s return to power? They sure must.