MANASSEH’S FOLDER: Why Akufo-Addo’s plagiarised speech is both good and bad omen 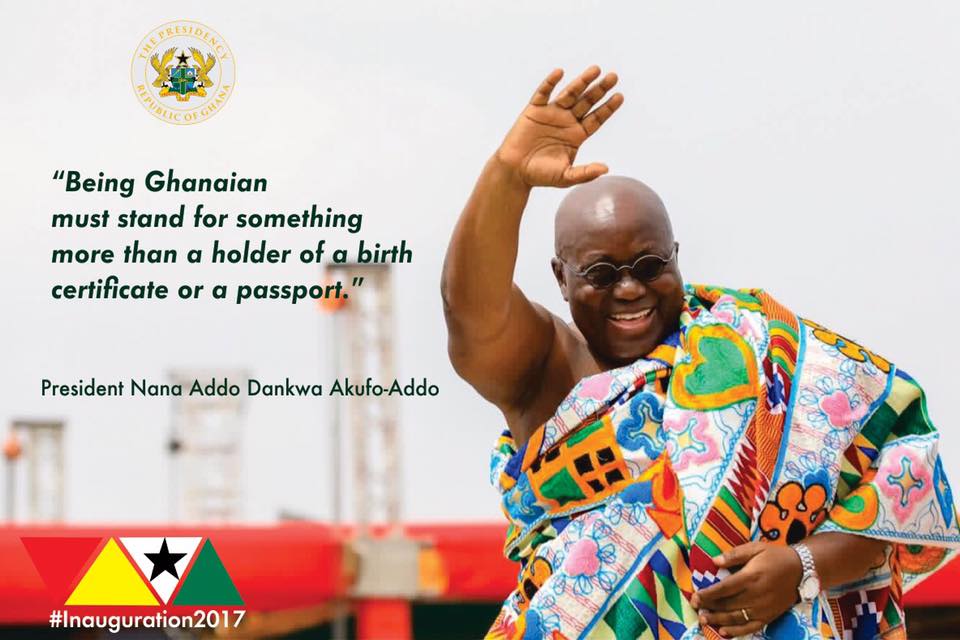 A child from a poor home, like the one in which I grew up, does not often look up to something special from its mother’s kitchen, but it does that at least once in a year – at Christmas. Ghanaians, like many Africans and the black race in general, have messed ourselves up. We do not have much to be proud about, especially when we compare ourselves with developments in Asia and the West. But, once in a while, a ray of hope shoots through the gloomy clouds of hopelessness and despair and fills our hearts with enormous pride. One such opportunity availed itself on Saturday, January 7, 2017, when Ghana inaugurated its fifth president of the Fourth Republic.

This may not be an extraordinary feat to the Americans, British, Germans or the French, but from where we find ourselves, it is a peerless achievement. When people elect their leaders, they are supposed to continue with their lives without killing and maiming one another and reducing their infrastructure into mounds of rubble. In Africa, however, this is rarer than sighting bearded men in Burma Camp. Ghana has, since 1992, changed from one political party to the other and scaled the tall and thorny electoral hurdle unscathed. We have often done that with some modicum of civility and Saturday was a celebration of one such feat.

About 17 heads of states, as well as many government officials and representatives from countries around the world, were here to witness the occasion. The Ghana Armed Forces band that was stationed at the Kotoka International Airport was splendid as it played the national anthems of all the visiting heads of state. At the Black Stars Square, the colourful ceremony was receiving plaudits on social media, despite a few avoidable hitches.

The first hitch was when the President was allowed to cough for too long before someone remembered to start looking for water. Why on earth would there not be water by him when he was to deliver such a long speech? Let’s remember a 72-year-old man does not have the same energy as the 17-year-old Police Cadet Commander of Krachi Senior High School. I hope the absence of water was not an attempt to say, “Our old man, unlike your young man, does not carry a flask wherever he goes.”

The other hitch was the protocol blunder, which allowed the ECOWAS Chairperson and the President of Cote d’Ivoire to speak after President Akufo-Addo had delivered his inaugural speech. Our wise elders have taught us that when the elder of the house finishes bathing, the household runs out of water. This conventional wisdom in traditional protocol ensures that the Chief or the most respected member of the society speaks last so that his or her words are the parting message to the audience. On Saturday, Nana Addo Dankwa Akufo-Addo was the most important person at the Black Star Square, and he should have been the last to speak.

President Akufo-Addo’s well-delivered speech was, however, too powerful to be drowned by the goodwill messages from the visiting heads of state. The ceremony on Saturday reminded me of the 59th Independence Day on 6th March 2016. President Mahama and his wife, Lordina, came to the ceremony clad in their bewitchingly colourful Ghanaian fabrics. The president delivered one of the most brilliant speeches of his tenure, but someone’s creativity that packed journalists into a rusty tipper truck to cover the event dominated social media before the programme ended. And before that died down, the error-ridden anniversary brochure monopolized social and mainstream media for days.

When President Akufo-Addo rode away in his BMW (remember his predecessor liked Toyota) to begin his presidency, I heaved a sigh of relief. I felt relieved that some sanity had returned to the presidency. I was sure that ruminating minds, in the coming days, would regurgitate the nutritious cud of patriotism, wisdom and inspiration provided by the newly elected President of our republic instead of feasting on the vomit of incompetence caused by officials who were fed, fueled, housed and protected by the state. I was wrong. A seven-headed demon of embarrassment more sinister than the brochure scandal was about to pounce on us. And it did not take long to arrive.

It emerged that some portions of the President’s speech were lifted from other speeches without acknowledging the sources. President Akufo-Addo quoted part of Thomas Woodrow Wilson’s speech but failed to acknowledge the source. Thomas Woodrow Wilson is the 28th President of the United States. He served from 1913 to 1921 and that speech was delivered in 1913. In that speech, he said, “I ask you to be citizens. Citizens, not spectators. Citizens, not subjects. Responsible citizens building communities of service and a nation of character.” President George Bush repeated this quote in 2001.

On Saturday, President Akufo-Addo said, “I ask you to be citizens: citizens, not spectators; citizens, not subjects; responsible citizens building your communities and our nation.”

President Akufo-Addo’s speech also contained quotes from President Bill Clinton’s inaugural speech, which he delivered in Washington DC on January 21, 1993. Here again, there was no attribution. President Clinton had said: “Though our challenges are fearsome, so are our strengths. And Americans have ever been a restless, questing, hopeful people. We must bring to our task today the vision and will of those who came before us.”

And President Akufo-Addo said, “Our best days still lie ahead. Though our challenges are fearsome, so are our strengths. Ghanaians have ever been a restless, questing, hopeful people. And we must bring to our task today the vision and will of those who came before us.”

In the primary school, we called it “copy copy.” But in academia, it is called plagiarism. It is a crime in Academia. The President’s team has done the honourable thing by apologising to Ghanaians. The Communications Director at the Presidency, Eugene Arhin, said “it was a complete oversight, and never deliberate.”

He added, “It is insightful to note that in the same speech were quotes from Dr. J.B Danquah, Dr. K.A. Busia, Dr. Kwame Nkrumah and the Bible which were all duly attributed and acknowledged.”

It is said that a man who is to be eaten does oil himself and sit by fire, but the NPP oiled Nana Akufo-Addo with the tastiest palm oil called “zomi” and left him by a bonfire for the NDC to roast and feast. And they did it so well. But some members of the NPP would not sit down and watch so they put up a spirited fight. They have downplayed the act, defended it or sought to equalize with blunders of the past administration.

What happened is indefensible. It is unacceptable. The brochure scandal was a matter of incompetence. What happened on Saturday was a matter of dishonesty. Replacing “Americans” with “Ghanaians” in a lifted speech is not a “complete oversight.” It is a deliberate act of dishonesty. I will choose an incompetent person over a dishonest person any day. A fool is better than a thief. For a man who rode on the moral high horse of incorruptibility to the Presidency, there is nothing more embarrassing than delivering a plagiarised inaugural speech.

It does not matter how long the plagiarized lines were. They were significant punch lines that stuck with the audience. And those who are quoting the copyright law on the 70 years time limit to defend stolen paragraphs should stop advertising their ignorance. In this day and age, taking someone’s sentences and passing them off as your own is thievery. Strip plagiarism of its technical jargons and you will find corruption, naked corruption with its genitals hanging shamefully for all who care to see.

These are not African proverbs, where we don’t acknowledge sources. African proverbs are not documented and our elders have taught us that wisdom is not found in the head of one person. But Sidney Sheldon, in his Windmills of the Gods, also reminds us that, “No two eyewitness accounts are ever the same.” So while two persons may think in a similar way or write with the same words, their expressions are bound to differ.

Looking at the bigger picture, however, the scrutiny of the president’s speech that led to the discovery of the plagiarized material portends well for the country if this scrutiny is carried out throughout this administration. It appears this government will be the most scrutinized ever in the history of our republic. Apart from the mainstream media, part of which may soon be corrupted by government officials, the social media landscape in our country has never been more vibrant. This is a good omen for probity and accountability.

The bad omen is how sane people who should know better are defending the act. Would such people have defended, downplayed or remained silent if President Mahama had delivered this speech? Our biggest problem is not the ignorance of gullible foot soldiers but the dishonest and hypocritical stance of the influential middle and upper class, who only see the wrongs in our society when that wrong is committed by a particular person or group of persons. It’s shameful.

Nana Akufo-Addo’s team must wake up. It cannot be business as usual. The days when the citizens remained helpless and passive observers on the touchline of governance are over. We are going to be active participants, as the president encouraged, and whoever messes up should know that “nobody killed Antwi.”

Note: The article circulating on social media in my name as the writer is fake.  I have not written that piece.

The writer, Manasseh Azure Awuni, is a journalist with Joy 99.7 FM. His email address is azureachebe2@yahoo.com. The views expressed in this article are his personal opinions and do not reflect, in any form or shape, those of The Multimedia Group, where he works.