Politician Of The Year 2016 Is Alan Kyerematen! 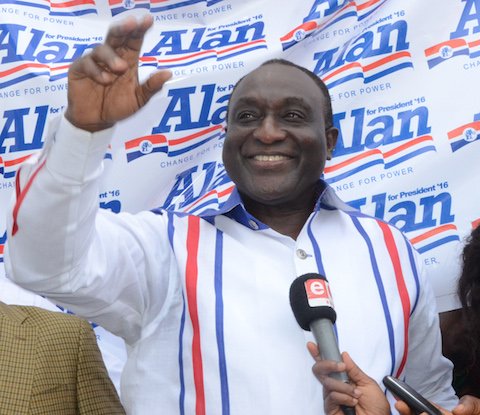 Our airwaves have been choked with speculations of who might possibly make it onto the Ministerial List. Fairly enough, all the names making the rounds are COMPETENT Ghanaians (hope they heed the admonishing of the President Elect, Nana Akufo-Addo, to retreat if their motivation is not for service but CASH).

Interestingly, the man with whom the decision rest, the President-Elect, has unconventionally been dropping the names of his first list as he interacts with some political actors in preparedness for his official taking over of the reins of power on January 7, 2017. I know for a fact that some people are having butterflies in their tummies as some are at prayer camps, mosques, and shrines, trying to catch the spiritual eyes of the leader. It reminds me of the biblical plot where Jesus the Christ once reclined at table with His twelve apostles and hinted them that one of them would betray Him. They individually asked Him “master, is it I”? As Nana drops the names along the way, many are asking the question the apostles asked the master, but this time they ask “will it be me next? Sheikh I.C Quaye is asking, Ayorkor Botchway is asking, Prof. Mike Oquaye is asking, Catherine Afeku is asking, Mustapha Hamid is asking, even Oko Vanderpuje and Akua Donkor are asking (hahahahahaha, Ghana is a lovely country!).

But one name, in fact, the first name the President Elect has officially and publicly mentioned and has been thunderously applauded by all is ALAN KWADWO KYEREMATEN. He is safe!

The President-Elect made the announcement when he addressed the Annual General Meeting of the Association of Ghana Industry in Accra. By inference, the President-Elect told the business community and anointed Alan in the proverbial phrase “Behold thy Minister”!

By no shred of doubt, Alan is the man for the job. He brings to the table a wealth of experience, knowledge, maturity, candour and a heart to serve. He served in Former President John Kufour’s government when he was appointed in 2003 as a Cabinet Minister with responsibility for Trade, Industry and the President’s Special Initiatives (PSI) with additional responsibility for Private Sector Development (PSD). If for nothing at all, I remember him for the National Friday Wear. In that capacity as Trades Minister, he spearheaded the development and implementation of innovative programmes which have become new strategic pillars of growth for the transformation of the Ghanaian economy.

I remember also that there was a massive revival of the garment and oil palm industries. Supply in the oil palm industry rose from 250,000 seedlings per annum in 2001 to 4 million as at the end of 2004, from twelve nursery sites. Over 102,000 hectares of Oil palm plantation were cultivated.

With the new government’s mantra of “One District One Factory”, and considering Alan’s skills, he is best fit for this industrialization drive – records show that when he served in the Kufuor government, he rolled out and implemented the Districts Industrialization Programme, a comprehensive programme for rural industrialization involving the setting up of at least one medium-sized factory in each administrative district in Ghana.

But as the eventful 2016 year draws to a close, I seek to salute and nominate ALAN KODWO KYEREMATEN as my POLITICIAN OF THE YEAR.

He displayed what I observed to be a rare political virtue throughout the election process – something the youth and young politicians must emulate.

This is the man who made an attempt at the leadership of the New Patriotic Party in 2007, capturing 32.30% of votes cast. He was first runner-up to Nana Addo Dankwa Akufo-Addo who gained 47.96% of votes cast. He made another attempt in 2010 where he placed a distant second with 20.40% of total valid votes cast to Nana Akufo-Addo's 77.92%. In 2014, Kyerematen once again came second to Akufo-Addo in the presidential primaries to elect a flagbearer to lead the NPP in the 2016 general elections. In the super-delegates congress organised to shortlist the number of prospective candidates from 7 to 5, Kyerematen polled 7.97% of the valid votes cast compared to Akufo-Addo's 80.81%. In the final presidential primary to select the flag bearer, Kyerematen was first runner-up with 4.75% of the votes while archrival Akufo-Addo received 94.35% of the votes to win the contest.

In the African political space, Alan and the President-Elect, Nana Akufo-Addo are deemed and termed ARCHRIVALS, ENEMIES, simple! At least judging from their past duel. But rather admiringly, Alan Kyerematen was seen on television screens on almost every platform with Nana Addo, campaigning vigorously. He stuck to Nana each step of the way. Wow!

I do not care really about what political watchers might interpret this to mean – whether Alan is preparing to succeed Nana Addo when he completes his term as the flag bearer or for a cabinet post. I believe Nana Addo saw a pure and genuine heart in Alan hence the symbiosis between them.

Late President John Mills taught us to live peaceably with each other and to do clean politics. Alan, you have taught us to be gracious losers and to support our rival till he succeeds, especially when we concede it is his season. Politics should build relationships.

Sir, we observed and noticed this virtue. We salute you! Please accept to be our POLITICIAN OF THE YEAR 2016.