Akufo-Addo congratulates Buhari on his re-election 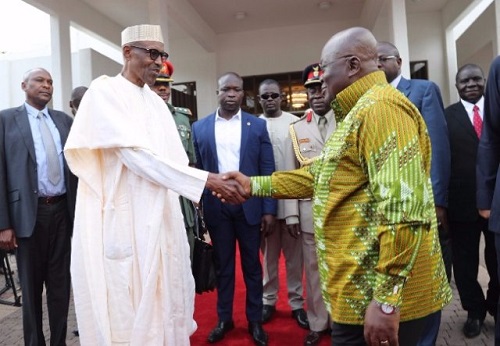 Buhari who stood on the ticket of the All Progressives Congress (APC), was re-elected for a second successive term.

According to President Akufo-Addo, the re-election of Buhari is a sign that Nigerians are pleased with his governance.

“I congratulate also the ruling party, All Progressives Congress (APC), for maintaining control, in an emphatic manner, over the Senate and the House of Representatives,” President Akufo-Addo said in a release issued Wednesday, February 27.

“It is also my overriding hope that, during his second term, the already strong relations between Ghana and Nigeria will be deepened even further, on a shared agenda of stability, security, development and prosperity,”

He also commended the PDP presidential candidate, Alhaji Atiku Abubakar “for a vigorous, well-fought campaign, and I applaud his decision to ventilate his dissatisfaction with the results of the election through a constitutional process.”

It is testimony to his credentials as a well-established statesman,” the President noted.

The statement concluded: “Strengthening the frontiers of Nigerian democracy, and consolidating the peace and stability of Nigeria, Africa’s giant, are important for the progress of our region and continent.”

The 76-year-old defeated his main rival, former Vice-President Atiku Abubakar of the People's Democratic Party (PDP), with a margin of nearly four million votes in the elections on Saturday, February 23.