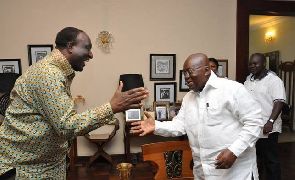 President-elect Nana Akufo-Addo has officially confirmed Alan Kyeremanten will be his minister of trade and Industry.

Mr Akufo-Addo reportedly made the confirmation while meeting with the Private Enterprise Federation at the Ghana Institute of Management and Public Administration (GIMPA) to disclose his administration's strategy for the private sector for the next four years.

According to the president-elect, Mr Kyerematen and yet to be named Ministers of Finance Economic Planning, will make up a team which will responsible for the transformation of the country's economy and ensuring a sustainable macro-economic stability.

"All irrational policies will be stopped," he promised and guaranteed a shift from the policy of taxation to that of production which will boost the economy.

"...You asked for a government that worked with you rather than dictate you...You are getting it," the president-elect stated, charging, "roll up your sleeves and get to work", he stated according to myjoyonline.