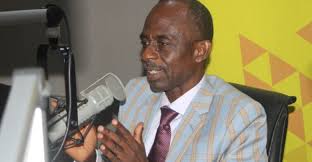 The opposition National Democratic Congress’ (NDC’s) General Secretary, Johnson Asiedu Nketia (aka General Mosquito) has suggested President John Mahama listens to wise counsel, unlike President Akufo-Addo, who he claims rejected Asantehene’s counsel to concede defeat after the 2012 General Elections, when he was a candidate.

Speaking on JoyNews’ PM Express program on Monday night, General Mosquito said “not him [Asantehene] alone, but other opinion leaders in the country spoke to Nana Addo and he said he won’t accept the results”.

The NDC scribe said this to buttress his claims that former President, John Mahama is more democratic than the current President, who he argued went to court to challenge election results, despite persuasion from the Asantehene and other key opinion leaders within Ghanaian society.

Mr Asiedu Nketia’s comments come after an address by the Asantehene at the United Nations (UN) General Assembly High-Level Forum on the Culture of Peace 20th Anniversary where he said his palace persuaded the losing candidate [Mahama] in the 2016 elections to accept defeat.

This has sparked an ongoing debate which has resulted in some social media commentators questioning the democratic credentials of former President Mahama.

Others, like the founding president of Imani Ghana Franklin Cudjoe, disagree with the suggestion that the Otumfuo’s statement were damning to the NDC flagbearer’s credentials as a democrat stating in a tweet that:

Mr. Asiedu Nketia noted that the attacks are unwarranted, describing them as “neither here nor there”, therefore, rejecting the criticisms against his party’s 2020 flagbearer.

The response from the former President’s office to the Asantehene’s remarks has caused a backlash, with individuals and groups from the Asante kingdom calling for the Asantehene to take action against Mahama and the NDC for responding to his claims.