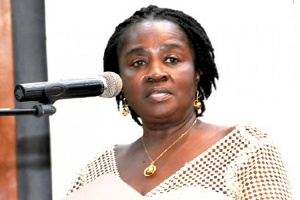 Vice Presidential Candidate for the NDC, Professor Naana Jane Opoku Agyemang has questioned the reason behind EC Chairperson's wish for John Mahama to have personally filed his nomination.

According to her, the EC boss had engaged Mahama before and there was no need for her to be expecting him to personally file his nomination.

General Secretary of the NDC Johnson Asiedu Nketia filed the nomination on behalf of their flagbearer at the EC's headquarters in Accra.

But the EC in reaction to the filing of the nomination by the General Secretary said the commission would have wished for the flagbearer himself to file the nomination which will give them the opportunity to address some of the concerns he raised against the electoral process.

Speaking to the wish of the EC, Prof Opoku Agyemang said there was no need for such encounter because the EC boss had engaged John Mahama before.

She stated that the decision not to personally file his nomination was not against the law so there is no reason for the EC to have said that.

Prof Opoku Agyemang noted that the EC had the media at the filing of the nomination and could have used that to address the many concerns raised against the processes.

To her the comment of John Mahama not to accept the result of a flawed election was apt.

She also said she is not sure any party in the country will accept a result of flawed elections.

Explaining what a flawed election means she said when the processes are not transparent and all parties are finding it difficult to accept all the steps taken by the EC in the execution of their mandate.