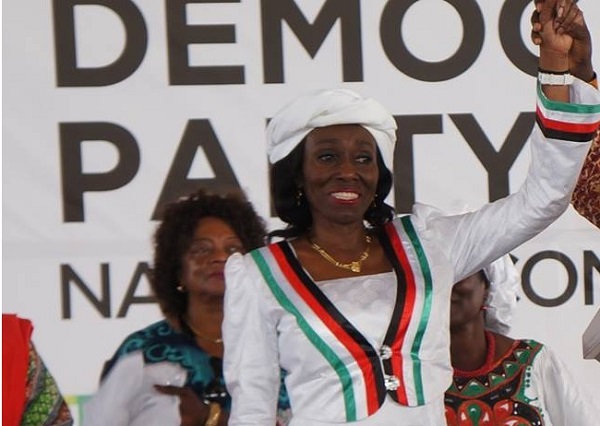 The National Democratic Party (NDP) have acclaimed former First Lady, Nana Konadu Agyeman Rawlings, as flagbearer ahead of the 2020 elections.

This will be the second time Mrs Rawlings would be running as a presidential candidate as she has been endorsed.

A statement issued and signed by the party’s General Secretary, Alhaji Mohammed Frimpong, said the former First Lady was chosen out of three aspirants.

Director of Elections for the Electoral Commission, Dr Serebour Quaicoe officially announced her flagbearer after due processes were followed.

Last month the NDP elected their regional executives in the Ashanti Region.

Ashanti Regional Chairman of the National Democratic Party (NDP), Nana Opoku Agyemang says they are targetting 15 parliamentary seats in the Ashanti Region in the December polls.

The elected Ashanti Regional Executives consist of Nana Opoku Agyemang as the Chairman, Hajia Kandey as the Secretary, Elizabeth Asiamah as the treasure and Abdul Rashid Muslim as the Youth Leader.

Others are Irene Antwi as the Women’s Leader, Abdul Razak as Communication Leader and Stephen Manu as his Deputy.

Nana Konadu was formerly a high ranking member of the National Democratic Congress before breaking away.

In 2012, the Electoral Commission (EC) disqualified her and 11 other presidential candidates for failing to meet requirements before the September 30 deadline to file nomination documents.

She contested again in 2016 on the ticket of the NDP.